New terminal means research data can be sent wirelessly to UK, rather than via hard drives sent back to Earth

A new communications terminal has been attached to the European Space Agency’s Columbus module on the International Space Station (ISS), allowing for direct communication to and from Earth.

The Columbus Ka-band Terminal (ColKa), developed by the UK Space Agency in conjunction with MDA UK, is the UK’s first major industrial contribution to the spacecraft. It will allow astronauts and researchers to create a dedicated link back to Earth and relay data and results from experiments from the Columbus module at ‘broadband’ speeds of up to 50 Mbit/s for downlink and up to 2 Mbit/s for uplink.

“Strengthening the speed at which data can be transmitted from space will bring enormous benefits to scientists and researchers across Europe, helping them progress vital research faster, while opening up numerous commercial opportunities for UK firms as we build back better,” said science minister Amanda Solloway.

Read about NASA's plan to build an Internet for the Moon in the latest issue of DCD Magazine. Available for free today. 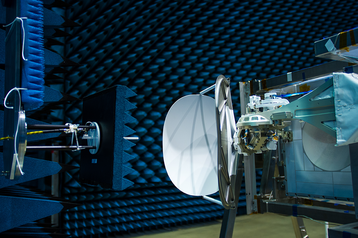 The UKSA says results of experiments were previously returned to Earth via hard drive, which could take months to receive and sometimes resulted in data being lost in transit. With the new terminal, results will be delivered to scientists just a day or two after the data is recorded, and on-board experiments can be watched live via video link.

Operating in the Ka-band, the module will transmit the data to a ground station at Harwell Campus, Oxfordshire, near ESA’s European Centre for Space Applications and Telecommunications, and from there it will be transferred to the Columbus Control Centre and user centers across Europe.

NASA’s Victor Glover and Michael Hopkins ventured outside the space station for six hours to mount the suitcase-sized device to the Columbus module. The module first arrived in February 2020 aboard the Cygnus NG-13 Commercial Resupply Mission to the ISS.

“We are extremely excited that ColKa is being brought into service. This system is our first flight system developed through MDA UK, and we now have equipment for another seven flight missions, including four lunar systems, under development in Harwell. ColKa will bring tremendous benefit to all our ESA astronauts, scientists and projects,” said David Kenyon, managing director at MDA UK.

ColKa is part of the European Data Relay System and complements connectivity provided by a US satellite communications system.