Pfleging replaces James Connaughton, who will remain as Chairperson of the Board. Connaughton, previously the environmental adviser to George W. Bush, will also act as an 'advocate' for the company.

Nautilus is best known for its floating barge data center concept, but is also trying to push into near-water data center deployments. 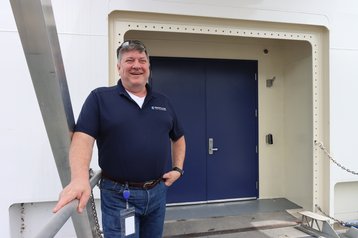 "Nautilus set out on a specific mission to unleash computing performance with the smallest environmental footprint for the greatest social gain globally," Connaughton said.

"We have proven that mission is achievable with breakthrough innovations in data center architecture, engineering, construction, and operation validated by the successful commissioning of our first commercial scale data center, onboarding of leading customers, and partnership with a growing network of international suppliers and developers. Following two years of operational success as company President, Rob is the ideal leader to take us forward and deliver on this mission globally."

Prior to two-and-a-half years at Nautilus, Pfleging spent three years as SVP of global solutions at Vertiv, ten months at CenturyLink as VP of data center engineering, five years at Mercy leading its data center operations, and seven years at APC as an engineering manager.

"For the last two decades, I've built data centers striving for greater efficiency with each project but only achieving incremental improvements," said Pfleging.

"But Nautilus' combination of data center delivery and water-cooling technology allows us to set unparalleled benchmarks for efficiency, performance, and sustainability. With our build and cooling innovations, we can help customers build data centers in half the time and in a wider range of locations; especially difficult to develop locations where demand for data center services is dramatically increasing."

The company currently only operates one floating barge in Stockton, California, but plans to build a land-based facility in Maine. It also has projects in the works in both Ireland and mainland Europe and has MoUs to explore business opportunities in Thailand and the Philippines.

In the latest issue of the DCD Magazine, Pfleging gave us a tour of its sole facility, and explained Nautilus' business strategy. Read it for free today.