The stock exchange company announced in December 2021 that it was expanding its presence at the colo firm’s site to support the build-out of its cloud infrastructure. 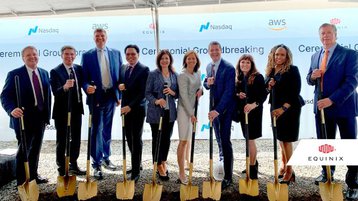 “We are excited to have Adena Friedman, Nasdaq Inc. President & CEO, join Charles Meyers (he/him), Equinix President & CEO, and Equinix team in this expansion ground-breaking event at NY11,” Equinix said in a LinkedIn post this week. “We’re proud to partner with Amazon Web Services Cloud Computing to enable Nasdaq to accelerate its journey to the cloud.”

The expansion will double the size of Nasdaq’s existing facility at 1400 Federal Boulevard. The current single-story facility offers 91,413 sq ft (8,493 sqm) of colocation space. Originally built in 2000, the Carteret facility is among 24 data centers Equinix bought in 2016 from Verizon.

Last year Nasdaq also announced plans to migrate to AWS infrastructure but also bring AWS infrastructure into its on-premise network. Beginning in 2022, the company said it will migrate its North American markets to AWS in a phased approach, starting with Nasdaq MRX, a US options market. It also plans to incorporate AWS Outposts – the cloud company’s on-premise appliance offering – directly into its core network at the Carteret facility and use a new Edge computing solution co-designed by the two companies specifically developed for market infrastructure.

During the company’s Q1 2022 Earnings call, Adena T. Friedman, president, CEO & Director, Nasdaq, Inc said: “We are heavily engaged with AWS. They're deploying their outpost solution into our data center.”

“That data center expansion will be done in 2024, which then allows us to offer more capabilities to our clients, expand the AWS presence and make it so that we can continue to really create that private local zone that is available to our ecosystem of market participants and investment clients beyond what we do today.”

“Our goal is to have MRx, which is one of our options exchanges, migrate over to the Outpost implementation and on to our new Fusion platform before the end of this year.”

Nasdaq expanding in NJ after a near-exodus

The expansion comes after the Nasdaq was close to an exodus. During 2020 and 2021 the New York Stock Exchange and Nasdaq are warning they will move out of New Jersey if the state implemented a proposed tax on financial transactions.

The proposal would have charged a quarter of a cent per financial transaction for entities in New Jersey that process at least 10,000 transactions annually via electronic infrastructure, but seemingly stalled in the wake of the threatened relocations.

“Two years ago, honestly we almost blew it. I remember standing in my district, in Mahwah, with hundreds of hard-working men and women from the building trades, when some in our state wanted to add a tax to every financial transaction that runs through the data centers across Jersey. To stay competitive globally, companies like Nasdaq and the New York Stock Exchange would have had to shutter their doors here and move centers like this one to other states,” US Congressman Josh Gottheimer said at the groundbreaking ceremony this week.

“They could have literally flipped a switch, and poof, Jersey would have lost our data centers and all the jobs. It would have gutted New Jersey’s pole position in the financial sector.”

NYSE conducted tests to show the feasibility of moving operations out of the state. The state of Illinois was reportedly in touch with the NYSE about expanding its secondary data center location into its primary facility if the tax bill passes. The Nasdaq stock exchange was being courted by Texas, with Governor Greg Abbott tweeting he had been in touch with the exchange about moving operations to the state from its current facility in New Jersey. Virginia, North Carolina, and Illinois were also reportedly in discussions with Nasdaq.