Data is the new water

Microsoft has brought its Project Natick data center back to land, after running the small system off the coast of Scotland’s Orkney Islands for two years.

Natick consisted of 12 racks in a sealed container, resting on the ocean floor some 117 feet deep. More than half the world’s population lives within 120 miles of the coast. 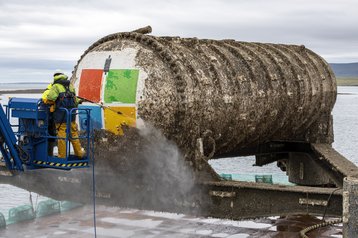 The data center featured 864 servers and 27.6 petabytes of storage in a cylinder filled with unreactive nitrogen gas, and was tethered to land by a cable that provided both a fiber connection and power.

The deployment was Microsoft's second trial run of underwater data centers, having submerged a smaller system for three months back in 2016.

“We are now at the point of trying to harness what we have done as opposed to feeling the need to go and prove out some more,” project head Ben Cutler said.

“We have done what we need to do. Natick is a key building block for the company to use if it is appropriate.”

Next, Microsoft plans to study why the Natick servers proved eight times more reliable than those in a replica set up on land - with stable temperatures, no oxygen corrosion, and a lack of people to bump and jostle components thought to be the reason.

Some of the findings may help inform data center construction on land, the company said. It also will take lessons on renewability from the project's successful deployment, with Natick relying on wind, solar, and experimental tidal technologies. “We have been able to run really well on what most land-based data centers consider an unreliable grid,” Spencer Fowers, principal member of technical staff for Microsoft’s Special Projects, said.

“We are hopeful that we can look at our findings and say maybe we don’t need to have quite as much infrastructure focused on power and reliability.”

As for future underwater deployments, Microsoft admitted that the project is still in the early days, but said that if it were to create a data center with the same capabilities as a standard Microsoft Azure deployment it would require dozens of the vessels. Back in 2017, the company patented an 'artificial reef' of data centers that shows a similar approach.

It may not need to do that, however, with the company saying that it could be used for Edge deployments, or for data that needs to be highly secured.

“We are populating the globe with edge devices, large and small,” William Chappell, vice president of mission systems for Azure, said.

“To learn how to make data centers reliable enough not to need human touch is a dream of ours.”

Chappell's team is particularly interested in tests of post-quantum encryption technology that could be used to secure data. “The fact that they were very quickly able to deploy it and it has worked as long as it has and it has the level of encryption on the signals going to it combines to tell a pretty compelling vision of the future,” Chappell said.