Microsoft has been awarded a high pressure data center patent that would allow for far more efficient heat transfer than traditional approaches.

"Some data centers employ heat sinks and electric fans (which can consume a substantial amount of energy)," the filing (Patent US10426062) states. "In cases of higher power levels liquid cooling circuits and liquid immersion baths (which can be expensive and error-prone), more expensive heat sink solutions, etc. are required.

"What is needed is a system to efficiently improve data center cooling without needing expensive additional hardware."

That system, the patent believes, is a hermetically sealed data center full of high pressure gas. 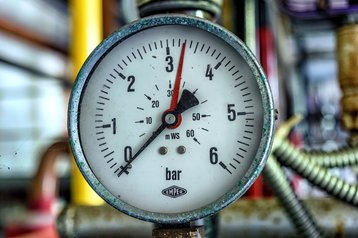 Microsoft declined several requests for comment, but the patent filing gives a lot of detail. Higher pressure makes air denser, and increases its heat capacity - and therefore the amount of heat it can remove from IT systems. The patent envisions a choice of gases under different pressures. "The gas might be pressurized, according to some embodiments, from at least substantially 2 times standard pressure to substantially 5 times standard pressure," the patent notes.

In an attached diagram, Microsoft showed the potential benefits of different gases at different pressures on heat transport and fan power: 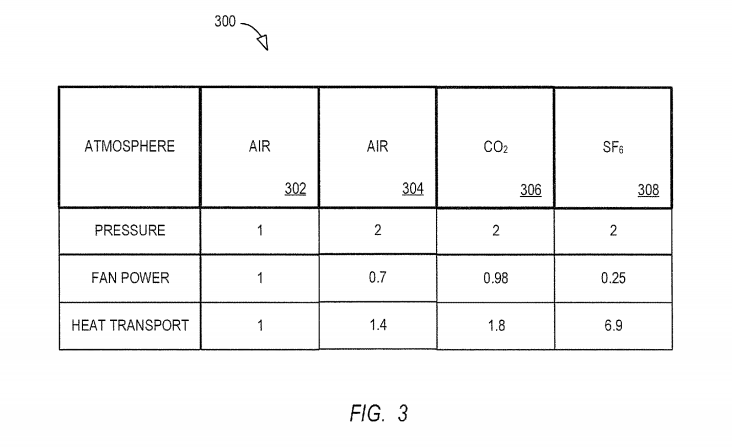 Sulfur hexafluoride is an inert gas with a high molecular mass, already used as a dielectric medium for high-voltage circuit breakers, switchgear, and other electrical equipment.hexafluoride. Microsoft's patent says that, in a hermetically sealed data center filled with SF6, fans can be powered at 25 percent of standard levels, while heat transport is nearly seven times as effective.

However, although SF6 is non-flammable and non-toxic, it is the most potent greenhouse gas that the Intergovernmental Panel on Climate Change has evaluated, with a global warming potential of 23,900 times that of CO2 over a 100-year period. It has an estimated atmospheric lifetime of 800 - 3,200 years.

Any unit, even a hermetically sealed data center would inevitably leak a small amount of the gas. Leaks at industrial sites have happened, with SF6 levels increasing every year. According to electrical company Eaton, which manufactures switchgear without SF6, leaks could be as high as 15 percent for switchgear over its lifetime.

One of the largest single users of the gas, the Department of Energy, discovered that it too was leaking huge quantities of SF6 into the atmosphere, but managed to reduce the amount after extensive work.

Microsoft's patent does not delve into the risk of leaks, but details a gas management system that "might, according to some embodiments, automatically perform pressure sensing (is the pressure too low or too high?), gas composition sensing (how pure is the gas?), pressure control (to increase or decrease the pressure), gas composition control (to adjust the composition), and/or control of the human access safety door (e.g. to ensure operator safety).

Increased pressure or changing the gases in the data center suggests this may be intended for a lights-out facility with minimal need for maintenance. However, humans will need to access the data center for servicing and upgrades, requiring a system of "human access safety doors," pressure control units and a gas management system, to make the server room safe for a human. 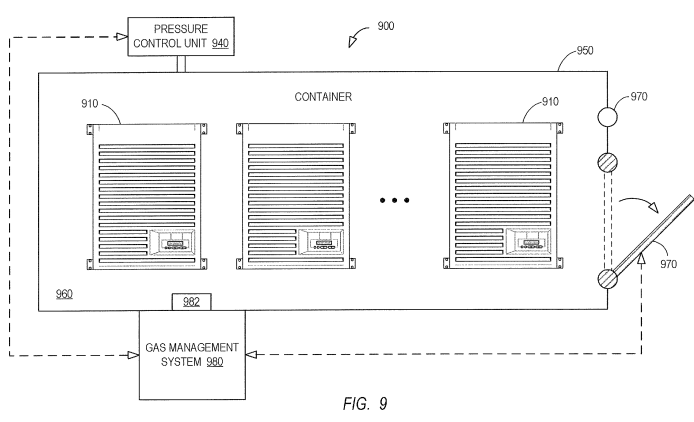 It is worth noting that Microsoft already has an advanced project involving a low-maintenance data center in a pressure vessel: the Project Natick research initiative.

The company has submerged a shipping container-sized prototype data center off the coast of the Orkney Islands, Scotland. A 12-rack cylinder, Natick is filled with nitrogen gas. However, the project's website notes that the system is operated at one atmosphere.

The "high pressure, energy efficient data center" patent does not discuss the possibility that the data center is submerged, and gives the impression that the human access safety door separates the facility from outside breathable air.

The patent is credited to Winston Saunders, manager of advanced data center development at Microsoft. Previously, he spent more than 20 years at Intel across various roles, including as the director of data center power initiatives.