Do androids dream of fusion generators?

It’s been called a fantasy, a pipe dream, a quixotic quest whose goal is always ten years away. And yet, there are those convinced that scalable fusion power generation could become a reality, allowing humanity to harness the energy of mini-suns, dramatically changing how we produce power.

As CEO of TAE Technologies, the world’s largest private fusion reactor company, Michl Binderbauer is one of those who believes that fusion power could be on the near horizon - and is using artificial intelligence co-developed with Google to help make it a reality.

A quest for power 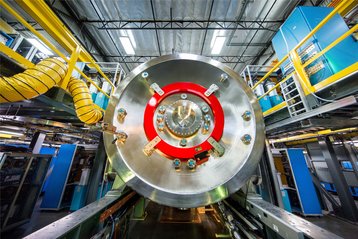 “A ballpark number of when you would see the first electrons on the grid from a system like ours is probably on the order of a decade. If we're absolutely lucky, perhaps a little bit sooner, but I think that's a good sort of mile marker,” Binderbauer told DCD.

TAE’s approach differs from that of supranational efforts to build enormous ‘tokamaks,’ like the 23,000-ton, €20 billion ($22bn) one under development by international body ITER. Instead, TAE aims to develop smaller systems that produce less energy, but are cheaper to build.

In its latest prototype machine, Norman, both ends of the cylindrical colliding beam fusion reactor (CBFR) heat hydrogen gas to form two smoke rings of plasma. These rings are then shot at each other at supersonic speeds, merging in the middle of the machine, forming a spinning plasma ball held together by self-created magnetic fields. Neutral-beams, consisting of neutral particles with no electric charge, are then used to stabilize the plasma and help make it hotter and last longer.

“That's what the power plants will be all about - hot plasmas that live forever, and very highly efficiently use the energy you put in to produce more for the fusion process.”

We’re not there yet, not even close. Still much needs to be discovered and optimized, so every day TAE conducts around 50 ‘shots’ - small, short-lived tests that change numerous variables, including timing, voltage of power supplies, shape of magnetic field and more.

This is where artificial intelligence comes in. Norman, named after the company's late co-founder Norman Rostoker, has approximately 80,000 different settings one could tweak, Binderbauer said. “This is like a many hundred dimensional cube that you have to go through - so as humans, you go one knob at a time, right?

Then the company began looking at advanced statistics and relatively basic forms of machine learning to speed up the process. It got serious results, Binderbauer said, just from TAE “looking at papers in the literature.” From there, they realized ”if we could get real experts involved, this could probably be turbocharged. And that actually was the initial reason that made me go and reach out to Google." 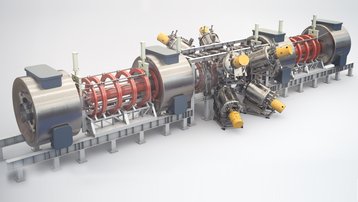 The two companies - both founded just months apart 21 years ago, but now with vastly different resources - began working together in 2014. "And that eventually led, as we evolved and matured, to the Optometrist Algorithm."

Officially revealed in 2017, the Optometrist Algorithm was named after the way eyeglass prescriptions are developed. Like an optometrist, the algorithm gives human operators a choice of two alternative experimental settings and associated outcomes, with the human choosing the one they believe better serves their needs, cutting down the time to find an optimum condition.

Since its christening, Optometrist has grown in scope, Binderbauer said. "We expanded in doing parameter searches around those optimal conditions to find, perhaps, new regimes, and really study science. And that then develops the algorithm further, whereby we would basically create a reference case, and then a newly suggested case.”

The company realized that, while humans were limited to changing one ‘knob’ at a time to be able to discern cause and effect, “when we started doing it with the computer, we could do perturbations of 60 knobs at a time, and then disentangle it - that's a huge improvement. But then we went further, and we said, let's compare the human by itself, computer by itself, and the combined human and computer.

“To our delight, we saw that when you use both machine learning and the human to introduce an element of some creativity and intuition, then you can actually exponentiate even faster.”

It is this, ahem, fusion of technology and human that could have a lasting impact on research and on businesses, even if TAE’s wider goals do not pan out. “I would call it almost doing science by Machine Learning Assistance,” Binderbauer said.

“This algorithm, it doesn't just service fusion, it was written for noisy data, continuous data, and data of high dimensionality. And that those are all characteristics you find literally across the sciences and engineering.”

Take social studies as an example: “If you look at data sets of population statistics and stuff, you will find disjointed features, because in one area the people are either different genetics, or they live under different environment. So there's certain impacts that are different. And then you have discontinuity, some things don't exist here versus there.”

Optometrist, Binderbauer hopes, could find use among such field. Parts of the algorithm have already been shared with other researchers and businesses that don’t directly compete with TAE or Google.

Google, which jointly shares the Optometrist IP, declined to comment on what it uses the algorithm for. "Google is a data company," Binderbauer said. "So they're learning with this, we're learning with this, and we're each using it for our respective evolution in quite different markets. We continue building the tools, deploying it now in different veins. With Google specifically, we're working together on the exploitation of much more sophisticated mining of interconnected data channels."

Google is deeply involved in the project: TAE has its own in-house servers, but most of the post-processing work is done on GCP.

One of the benefits of the increased processing power the cloud brings is that TAE can use high-speed cameras that take more than 60,000 frames per second, "and now Google is actually helping the post-processing, taking these and turning the images into 3D resolved intensity data sets."

Binderbauer added: “Google now knows a lot more about plasma physics than you would think, and our guys know a lot more about machine learning. The wonderful thing about is that that has helped us find breakthroughs.”

More tech developers should do this, he says: “Get a few people from a neighboring discipline, or maybe not so adjacent discipline, and throw them in the cauldron, mix them up, because that brings out a healthy new perspectives on things.”

With new insights and tools, TAE hopes its partnership and algorithm will shorten the time to achieve fusion power. But, even if that fails to happen, the company hopes that Optometrist itself will have a large impact. “I wouldn't be surprised if at this point, some of this found critical use in completely areas that we couldn't even dream of,” Binderbauer said.

“Sometimes when you have powerful tools like this that treat a class of problem that otherwise doesn't have a good tool, it becomes a really nice advance for humanity in and of itself.”