The New Zealand government has approved Microsoft's plans to build a data center region in the country.

Microsoft announced its intention to build a region back in May, which would keep New Zealanders' data within the country. This will meet the requirements of the new Privacy Act, which starts to take effect in December 2020. Prime Minister Jacinda Ardern spoke in favor of the proposal at the time, and the investment now has former approval from the Overseas Investment Office (OIO). There will be other approvals to gain, and no timeline has been announced, but the OIO approval reveals that Microsoft has already bought interest in land in Auckland, worth more than NZ$100 million (US$67m). 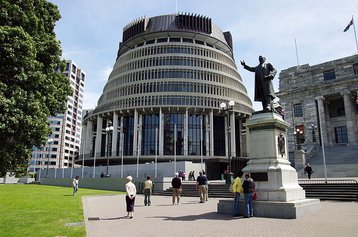 The Beehive - the executive wing of the New Zealand Parliament, in Wellington – bgabel / wikimedia

"Microsoft has been granted consent from the New Zealand Overseas Investment Office (“OIO”) to advance its plans to open a data center region in Aotearoa [the Maori name for NZ]," said Maciej Surowiec, Microsoft's government affairs lead for New Zealand. "OIO’s decision is an important step forward; one that will help Microsoft continue our mission to fuel new growth for our New Zealand customers as they accelerate their digital transformation opportunities."

New Zealand has around five million inhabitants, and Microsoft will be the first major cloud player to build a data center region there. The OIO approval is a formality, and follows the announcement that New Zealand's largest company, dairy cooperative Fonterra, plans to move its IT to Microsoft, and become the anchor tenant for the new Azure cloud region.

Microsoft also announced that New Zealand telco Spark is another anchor tenant for the new region. “Spark, New Zealand’s largest telecommunications and technology solutions provider, is delighted to partner with Microsoft to empower innovation,” said Jolie Hodson, Spark's chief executive, back in May. Spark is already an Azure customer.

"The Applicant has satisfied the OIO that the individuals who will control the investment have the relevant business experience and acumen and are of good character. The Applicant has also demonstrated financial commitment to the investment," says the OIO approval. "The Minister of Finance has determined that the Investment is not contrary to New Zealand’s national interest."

Some observers suggested that Microsoft might have done well to place the facility in Southland, in South Island, close to the 850MW Manapōuri hydroelectric power station, which will have space capacity since Rio Tinto Zinc has announced plans to close an aluminum smelting plant there. NZ Herald points out that this was never an option, as North Island has the majority of the NZ population, and international fiber optic cables land in Auckland.

There's more activity in New Zealand however. Australia's Canberra Data Centres (CDC) has announced plans for two hyperscale facilities in Auckland, according to the NZ Herald. Microsoft is a customer of CDC, which is 48 percent owned by Infratil, a company that also owns half of Vodafone New Zealand, the Herald reports.