The company this week held a groundbreaking ceremony in Lekki to celebrate the start of construction on the first of several planned data center campuses in Nigeria. 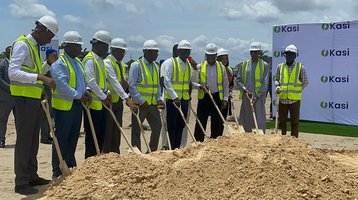 Kasi has acquired approximately 4 hectares of land in the Maiyegun Area of Lekki, outside Lagos, for its first development. Further specifications weren't shared.

The company is investing around $250 million in the project, and counts the Nigerian Sovereign Investment Authority (NSIA) among its investors.

Babajide Sanwo-Olu, the Executive Governor of Lagos State was present at the ceremony, alongside Kasi executives and investors.

“Kasi’s mission of building a digital platform to accelerate cloud and interconnect people, enterprises and governmental institutions in Nigeria and across Africa started here in Lagos, Nigeria,” said Kasi co-founder and CEO Johnson Agogbua. “We are excited to have both the Governor of Lagos State, His Excellency Babajide Sanwo-Olu and NSIA CEO, Uche Orji, to celebrate this momentous ground breaking with us and the community.”

Sanwo-Olu added: “If Lagos is to sustain its Centre of Excellence status in the country, vital infrastructural development is critical to achieving human capital development. The economic impact that infrastructure improvement has on nation-building cannot be overemphasized.”

"We congratulate Kasi on this momentous milestone. NSIA believes in the potential of digital infrastructure to serve as an enabler and accelerator for innovation,” said Uche Orji, CEO of the NSIA. “We expect that the transformative impact of this infrastructure on the domestic tech space will reposition Nigeria. The Board and Management of the Authority is proud to be associated with this development.”

Established in 2011, the NSIA is a state-owned body to manage Nigerian sovereign wealth funds, using proceeds from the country’s oil supply.