No bans on data centers, says Taoiseach Micheál Martin on visit to Singapore

Ireland will continue to welcome data centers, despite their energy demands, the Irish Premier has said.

There will be no moratorium on new data centers, Taoiseach Micheál Martin said yesterday, despite recent warnings from the Irish utility EirGrid that the country's energy plans could be derailed by energy use in the sector. He confirmed reports that new facilities will have to be able to generate some of their own energy on-site, however. 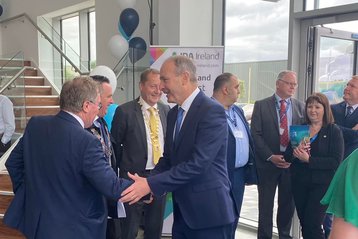 Martin's remarks, reported in the Irish Independent, came on a trip to Japan and Singapore, where a data center moratorium is just ending.

Last year it was reported that data centers use more than 10 percent of Ireland's electricity supply, and continued growth could cause blackouts and prevent the country from reaching targets for renewable energy use. After political parties the Social Democrats and People Before Profit called for a limit on data center development, the electricity regulator CRU refused to set a moratorium, but warned that grid operators could demand that data centers should be able to provide their own power at times of need.

Since then, a de facto moratorium appears to be in operation in Dublin, where no new data centers are expected before 2028, and Interxion (Digital Realty) has paused plans for expansion.

The war in Ukraine has also increased the need for European nations to reduce the use of natural gas, much of which is imported from Russia.

Despite this, Martin said data centers could not be stopped: “There can’t be a moratorium on them. In a digitalized world data centers are now part of the package."

Part of the issue is that data centers are an essential part of larger foreign investment deals he said, according to the Irish Mirror: “When particular companies invest in Ireland and have a big presence in Ireland they're saying it's not one or the other. You can’t say you want all of our investment but by the way, we don't want you doing anything with a data center."

Ireland would have to "weigh that up," he said: "We can't say no to all data centers because that potentially would be saying no to a lot of investment on the technology front both on the digital and the bigger companies."

Adding to this, Martin repeated the CRU's demand that tech companies should be able to generate their own energy in periods of need, and warned that there "would not be the same number of data centers built."

A new data center policy is due to be announced by Martin's colleague, the Tànaiste (deputy prime minister) Leo Varadkar in the next few weeks.

Meanwhile, in Singapore, a three-year moratorium is ending, with the government announcing a pilot program for data centers which - like future data centers in Ireland, will be expected to use innovative technology to help support the grid.