The Irish Social Democrat party is this week calling for a moratorium on new data center developments in the country over worries over energy demands and sustainability.

“The surge in data centers risks so much – our energy security, investment, jobs, and climate action targets,” the party said in a tweet today. “Yet, the Government has not done a cost-benefit analysis.”

“On Wednesday, we are introducing a Dáil motion calling for a moratorium on DCs.” 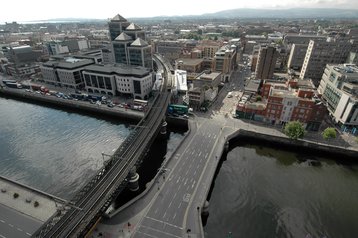 “It really is a runaway horse and at this stage, the Government does not have a grasp on exactly what that means for Ireland and our infrastructure,” said Jennifer Whitmore, TD for Wicklow and the Social Democrat’s Climate, Environment & Biodiversity spokesperson, in an accompanying video. “The government is essentially signing blank cheques for energy demand that we may not be able to fill.”

Whitmore followed up with a tweet saying the moratorium would be an interim measure to allow the Government time to “strategically plan for them and figure out how many Ireland can afford to have – sustainably.”

The party has previously talked about the need for a pause on data center developments, August Whitmore warned that Ireland’s “antiquated electricity grid cannot sustain the uncontrolled proliferation of data centers,” and in June said the Irish Government’s continued support of the industry had “created a monster that is now out of control.”

Though Ireland has become a major hub for data centers, their energy demands are raising concerns amongst politicians and environmentalists about meeting climate goals. In June the People Before Profit party put forward a new bill that would place an absolute ban on data centers, Liquid Natural Gas plants, and new fossil fuel-related infrastructure. That bill is still being debated in the Dáil.

In July the Irish Times reported the likes of Amazon and Google have formed a new group called the Cloud Infrastructure Ireland Group to lobby against any proposed ban on data centers in the country.

The Government has set a target that 70 percent of Ireland’s electricity will come from renewable sources by 2030. In its Generation Capacity Statement 2020-2029, EirGrid projects that demand from data centers could account for 27 percent of all electricity demand in the country by 2029, up from 11 percent in 2020.

In a recent consultation, EirGrid said it might require new energy-demanding projects such as data centers to be built near to renewable energy sources in future, moving data center developments away from Dublin and towards the west coast.

The Commission for Regulation of Utilities (CRU) has also told national grid manager EirGrid and ESB Networks to prioritize applications for data centers in regions where power supplies are not struggling. As a result, Eirgrid said that meant it could not approve grid access for more than 30 data centers currently being proposed.

The provinces of Flevoland, Amsterdam, and Haarlemmermeer in the Netherlands have all either previously or currently enforced data center moratoriums amid concerns over their energy requirements and environmental impact. Singapore has had an embargo on new data center developments since 2019.