Infinera has reached a new speed and capacity record for data transfer over the MAREA trans-Atlantic cable.

The optical networking company claims it achieved a deployable capacity of 28Tbps on a single fiber pair in a recent field trial, with a ‘hero’ result of 30Tbps of total capacity using its ICE6 optical engine. The company says it achieved a deployable peak line rate of 450-650Gbps and a ‘hero rate’ of 700Gbps on a single fiber pair over a distance of 4,125 miles (6,640km).

The company set the previous record of 6.21 bits per second per hertz (b/s/Hz) and a capacity of 26.2Tbps (per fiber pair) for the MAREA cable in 2018. The cable was originally designed to carry 20Tbps per pair.

“The 28Tbps option with ICE6 reduces the network element count by 60 percent vs. the boxes previously required for 24Tbps,” he said. 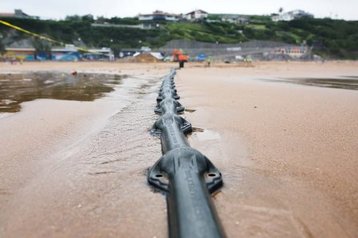 Completed in 2017, MAREA is a joint project between Microsoft, Facebook, and Telxius that connects Virginia Beach in the US and Bilbao in Spain via 4,125 mile (6,640km) fiber-optic cable under the Atlantic Ocean.

Initially designed for a capacity of 160Tbps, it has reached 200Tbps in 2018 using Infinera’s fourth-generation Infinite Capacity Engine (ICE4). The company claimed this as a then-record for trans-Atlantic real-time spectral efficiency.

The cable consists of eight fiber pairs. Two pairs each are owned by Microsoft and Facebook, while Telxius owns three pairs for its own and customer use. In 2019, AWS acquired a fiber pair on MAREA from Telxius on IRU basis.