US data center firm HostDime has held a groundbreaking ceremony for its new data center in Orlando, Florida.

HostDime is investing $35 million in a 95,000 square foot (8,800 sq m) data center and corporate headquarters over a five-acre complex just north of downtown Orlando. Construction is due for completion in summer 2022.

The company has been working on the project for a number of years; it originally broke ground on the site in 2016, before halting work in 2017, and announced it was picking the development back up in 2019.

“From the client-centric amenities to the highest availability of power design, we ensured this next-gen purpose-built data center facility had everything needed to support the current massive cloud adoption,” said Manny Vivar, CEO and founder of HostDime. “We look forward to this facility being the new home for all enterprise needs in the Central Florida area for data center infrastructure.”

The data center operations will occupy a three-floor wing of the building, while corporate offices and client-focused spaces will fill seven floors. 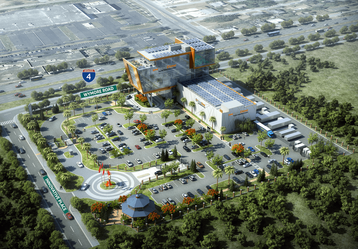 The company said its existing Orlando facility is nearing capacity, and the new category 5 hurricane-rated facility will feature space for over 900 racks and make a suitable business continuity and disaster recovery site for South Florida businesses.

Sourcing power from Duke Energy, HostDime says the facility will include solar panels on the roof with the possibility of connecting to an off-site solar farm in future. Backup generators connected to external fuel tanks mean the facility could reportedly run two weeks at 80 percent load without any commercial power available.

“We are very excited and proud to bring such an impactful development to the Historic Town of Eatonville,” added Vivar. “The Town has been an instrumental partner in our efforts and we kept the local community impact in mind as we designed this facility.”