HostDime breaks ground on a massive data center in Florida

The building is expected to open sometime in 2018 and will also house the company’s corporate headquarters.

“We have been excited to partner with Eatonville for some time. The town is rich with underground fiber. This is going to be a gem in the Orlando area and a huge economic impact for the town of Eatonville,” HostDime CEO Manny Vivar said when the deal was announced in May. 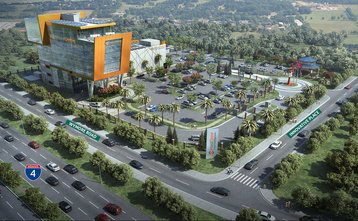 HostDime was founded in 2001 and opened its first data center in Florida in 2003. Today, the private company owns and operates infrastructure and networks in the US, Mexico, Brazil, UK, Netherlands, India, and Hong Kong.

The $25 million project was designed by Orlando-based Baker Barrios Architects and will include three floors of data center space, while the rest will be occupied by HostDime employees. The building will offer on-site executive suites for overnight customer visits, including full bathrooms, showers, and full-sized beds, which HostDime believes to be an industry first.

The data center will be able to host more than 35,000 servers at full capacity, supported by connectivity from more than a dozen Tier 1 network operators.

At its peak, the facility will consume 10MW of power from Duke Energy, which will be supplemented by solar panels on the roof – Host Dime hopes that up to a quarter of its power will eventually come from the sun.

The data center will be constructed to Tier 4 redundancy guidelines and include in-line, hardware-based DDoS protection. Meanwhile the physical exterior will be protected by automated drone patrols.