A French startup is proposing to float data centers on urban rivers.

Denv-R plans to launch facilities cooled by river water, starting with a test facility in Nantes next year. The company's two founders, based at the IMT Atlantique engineering school in Nantes, say this will reduce energy consumption and CO2 emissions. 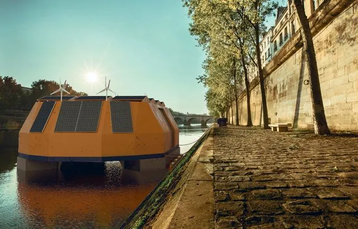 The company is planning to float a demonstration system on the Loire river by the Quai Wilson island in Nantes, in June 2023.

There is only limited information on Denv-R's website, but according to an article on 20 Minutes, the idea sounds similar to the barges pioneered by the US company Nautilus, which has a floating facility in California, alongside one in development in Ireland, and a land-based data center in Maine.

Denv-R says its system will be smaller than Nautilus', making it more suitable for deployment on urban rivers. It also circulates water passively, without the need for pumps.

Based on the render provided by IMT Atlantique, the facilities appear to follow a catamaran-like design, with two hulls next to each other. This may be to add stability.

Denv-R says it is planning a 200kW facility, which will be 10m long, 8m wide, and 3m high, making it similar in scale to a collection of shipping containers.

The render shows solar panels and wind turbines, and the company makes an optimistic claim that its power supply could be "largely autonomous."

The floating structure will be made of recycled steel according to Denv-R.

“We are going to recover the cold water from a river to lower the temperature of the data center via a closed circuit system. Without pumping water and without other air conditioning,” say CEO Vincent Le Breton and CTO Maxime Rozier in the 20 Minutes article. The pair make fairly standard claims for liquid cooled systems, of 40 percent savings on energy and C02 emissions.

River space in cities can be a good alternative to land, says Le Breton: “A data center should ideally be as close as possible to its users and therefore in towns. But in cities land is scarce and expensive. On the water, there is room."

The company has a couple of other business lines. It plans to offer public cloud and bare metal servers, and it also wants to build larger floating facilities which include offices.