Expedient has taken over a new data center in Phoenix that was previously owned by Blue Cross Shield.

“We’re continuing to build out new data center locations in under-serviced markets to meet growing customer demand,” says Bryan Smith, senior VP & chief strategy officer at Expedient. “This is all part of our Cloud Different approach, which enables clients to migrate to the cloud on their terms. We’re setting ourselves apart by offering a complete portfolio of services that are designed to get workloads and applications running on the right infrastructure from the start. This latest data center in Phoenix is just the beginning of our expansion plans.”

BizJournal has confirmed with the company that this is the same facility Five 9s Digital bought from Blue Cross Blue Shield of Arizona in October. The publication noted the sale price was $11 million. Smith said Expedient owns and operates the buildings, but the land is owned by the real estate firm.

Originally a build-to-suit Tier-III data center for Blue Cross commissioned in 2010, the data center is part of a complex of Blue Cross-occupied facilities, including an adjacent four-story, 100,000 sq ft (9,300 sqm) office building. At the time of the sale, DCD reported the facility was being leased to an operator, with Blue Cross remaining a customer.

Expedient said its customer base in the region includes the University of Phoenix, Los Angeles Regional Food Bank and Blue Cross Blue Shield of Arizona. Smith said the facility was currently only 25-30 percent utilized. 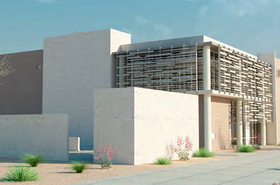 “Having Expedient here locally, in region, is a game-changer for us,” says Weldon Wu, CIO at the LA Regional Food Bank, a tenant at the new Phoenix data center facility. “They have been an instrumental partner in helping us better manage our ongoing cloud costs while optimizing workload and application performance. They continue to help us on our cloud journey, finding new ways to drive greater efficiencies and bottom-line results.”

This is the second facility Expedient has announced in recent weeks and 13th in total, and it said more are planned to be opened through 2022 and beyond.

Last month the company took over operations of a former Harley-Davidson facility owned by NTT in the City of Franklin, Wisconsin. The 28,500 sq ft (2,650 sqm) facility in Milwaukee County offers 1.2MW of critical power and capacity for more than 8,000 physical servers. The company said it can expand the available floor space from 5,000 sq ft (465 sqm) to 10,000 sq ft (929 sqm).