As long as you have access to a 3D printer

The launch of the Cray-1 supercomputer was a seminal moment in computing history.

The 160 megaflops Cray-1 came out in 1975, and soon was sold to more than 100 customers, making it one of the most successful supercomputer designs of all time.

The Cray-1 represented a significant leap in computing power, establishing Cray as a supercomputing company giant, and founder Seymour Cray as a tech celebrity.

With a unique C-shape design and leather-clad benches covering the power and cooling systems, the supercomputer also looked really cool. 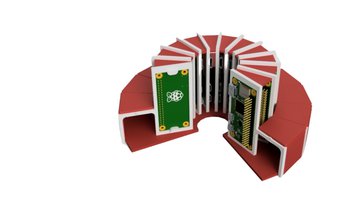 But with the relentless march of progress, the supercomputing crash of the '90s, and the acquisition of Cray by HPE in 2019, the system has faded from relevance, only to be found in museums or conference show floors.

Now, however, there is a chance to have your very own Cray-1. Well, at least a miniature version.

Raspberry Pi enthusiast Kevin McAleer has designed a small cluster of 12 Raspberry Pi Zero 2s that looks like the Cray-1, making the 3D STL files available for free, under the name Clustered-Pi Zero. Surprisingly (or not), the machine is way more powerful than the original - and far cheaper.

In a series of videos, he describes the process for creating the system, which of course requires access to a 3D printer. 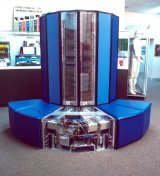 In case you need reminding, the Cray-1...

Let that sink in. With 12 Raspberry Pi Zeros installed, the Clustered-Pi would pack 288Gflops. That's around 1800 times the power of the Cray-1 - and a testament to the massive increases in compute power brought about by nearly 50 years of relentless miniaturization and development.

Alternatively, if McAleer's design is not to your liking, back in 2017 retro game YouTuber Dave Nunez built his own single-Pi Cray-1. He has also made the files available to download.

While both projects are a fun way to celebrate supercomputing history, there are also efforts to see if Raspberry Pis can serve a more useful function in supercomputing.

Los Alamos National Labs - which coincidentally was home to the first Cray-1 - in 2017 created a small supercomputer featuring 750 Raspberry Pis. The project was envisioned as a cheap way for LANL researchers to test Arm code on the system, before shifting to their main supercomputers, many of which are Cray systems.

And finally, if anyone is in any doubt that the Pi beats the Cray family, in 2018 Pi enthusiast RichardS benchmarked a Pi Zero against the recorded performance of the later (and more powerful) Cray-2, by comparing their performance in (what else) computing the value of Pi. In 1986, the Cray-2 set a world record by calculating Pi to 29 million digits in 28 hours. In 2018, A single Pi Zero happily churned out 40 million digits of Pi in only a half hour.

Of course, other Pi users, bless them, swiftly pointed out that in this particular benchmark, the Pi benefited from improvements in software, in particular the Chudnovsky algorithm invented in 1988.