Following a number of departures after HPE's $1.3bn acquisition

Dr. Daniel Ernst has left HPE Cray, becoming the latest to depart the supercomputing company after it was acquired by HPE in 2019.

Ernst was a Distinguished Technologist in the HPE HPC and Mission Critical Systems Advanced Technology team, who led investigations into future HPC architectures.

A high-performance memory systems expert, Ernst represented HPE and Cray at JEDEC and on the CCIX Consortium, and is a founding board member of the Gen-Z consortium.

He was also the co-lead of Cray's PathForward program, and part of Cray's exascale project with the Department of Energy.

How many before it becomes a pattern? 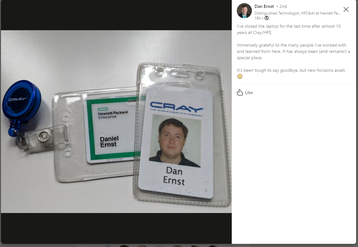 "I've closed the laptop for the last time after almost 10 years at Cray/HPE," Ernst said in a LinkedIn post.

"Immensely grateful to the many people I've worked with and learned from here. It has always been (and remains!) a special place. It's been tough to say goodbye, but new horizons await."

Ernst did not reveal where he planned to work next after a decade at Cray, but replies to other LinkedIn users indicate it will still be in the high-performance computing field. Update: Ernst has moved to Microsoft.

His departure is just the latest in a string of similar exits since HPE acquired Cray for $1.3 billion in cash, and comes as cloud computing has increasingly begun to serve the same customers as bespoke HPC solutions.

This year, Cray's CEO Pete Ungaro stepped down, as did senior software engineer David Greene, now at Cerebras Systems. A number of other 'Crayons' at different levels of seniority have also left.

Despite this, HPE Cray still has a promising lineup of supercomputers on the way, notably the entirety of the US government's exascale line-up. Aurora, Frontier, and El Capitan will all use Cray's Shasta architecture.