Digital Realty swoops in to buy Interxion for $8.4bn

Interxion has accepted a bid of $8.4 billion from the US giant. This will be the largest data center merger ever and is funded entirely by a stock swap.

This move will massively expand Digital Realty's European presence and continues the company's shift from wholesale colocation towards an interconnection-based model, intensifying its competition with rival colo, Equinix. 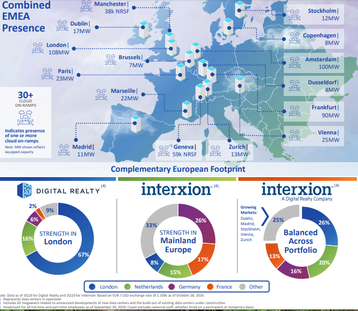 When complete, the deal would take Digital Realty to 260 data centers worldwide, which is more than Equinix's claimed 200. Although the two have a different spread of facilities: Digital has historically focused on building wholesale facilities to lease to hyperscale providers, while Equinix has concentrated on the enterprise market and interconnection services.

Interxion has 53 data centers, with a total of 290MW in 13 metro areas across Europe, while Digital's European holding is more concentrated in London. In combination, the two will have 93 facilities with a total of around 440MW, according to a presentation shown in a planned Digital Realty earnings call yesterday.

If the stock deal is completed as announced, Interxion shareholders will wind up with 20 percent of the combined company, and one member on Digital Realty's board.

The transaction values Interxion at $8.4bn, making for a share value of about $93.5 per ordinary share, considerably above the market value yesterday of $88.7.

The US buyer plans to keep the Interxion name for its European business, branding it "Interxion, a Digital Realty company". Interxion CEO David Ruberg will head the EMEA operation, and report to Digital CEO Bill Stein.

Beginning as a wholesale provider, Digital focused on leasing facilities to hyperscale clients whereas interconnection and enterprise colocation was offered by its rival Equinix. However, Digital Realty has now moved into interconnection after its acquisition of Telx for $1.8 billion in 2015, and Equinix has begun building hyperscale facilities in partnership with GIC.

The acquisition of Interxion would take this competition further, as Interxion has been steadily building a strong connectivity and enterprise business, with a particular grip on international fiber connections into the emerging hub city of Marseille in France. 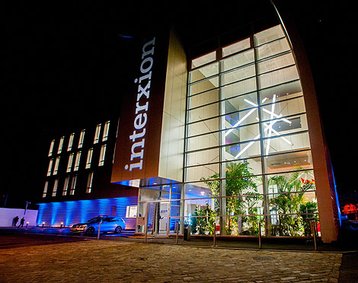 As the market has grown and consolidated, Equinix has also been buying and building in Europe.

In 2015, Equinix bought Telecity for $3.6bn, frustrating a planned merger with Interxion. European regulators then intervened, ordering Equinix to sell off eight facilities, several of them in London. These were bought by Digital Realty for $867 million.

Interxion already had a plan to expand its capacity by 40 percent over the next 24 months, and Digital's access to capital will help continue to finance this growth, said the joint announcement. In Europe, the data center sector is growing so fast that new space is often hard to come by, according to real estate player and data center operator, CBRE.

The two companies plan to realize cost savings: despite nearly doubling its European capacity, the operation will go from 800 Interxion staff to 1,100 when it becomes a Digital Realty company, though the release predicts that, through expansion, all staff of the combined organizations will have "expanded career opportunities".

The deal is subject to approval by shareholders and regulators, but speakers on the earnings call expressed confidence this would be forthcoming, with the deal due to be completed in 2020.