Digital Realty is offering liquid cooled servers in its SIN11 data center in Singapore, after successfully completing a test with local startup CoolestDC.

The CoolestDC technology can reduce power consumption by up to 29 percent, while increasing the performance of the IT equipment. It circulates liquid through brazed pipes to a network of cold plates affixed to the electronics in server chassis, and is being offered with bare metal servers in the SIN11 facility, so enterprises can test the technology for themselves. Digital says it will roll it out to other data centers. 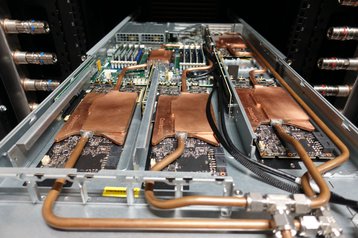 CoolestDC is a spinout from the National University of Singapore, led by Poh Seng Lee, who is also program director of cooling energy science and technology at the NUS. Dr Lee believes cooled servers as an answer to efficiently cooling data centers in a tropical climate.

As well as saving energy, Dr. Lee believes CoolestDC's technology will allow data center operators to use fewer servers in their racks. The pilot test at Digital Realty found that the system could reduce power consumption by up to 29 percent - but would also improve the performance of the servers by up to 39 percent, compared to conventional air-cooled servers - because the liquid-cooled servers never overheat, and do not require throttling back.

These two factors mean that the power bill for a single rack with a power density of 25 kW can be $25,000 a year less than a conventional air-cooled rack. The improved stability means that operators only need 25 liquid-cooled servers to do the work of 30 air-cooled servers, Digital's press release claims.

“When we first started looking at commercializing our technology, the main delta was PUE and cooling energy consumption. However, we soon discovered that IT cooling equipment performance can be greatly enhanced,” said Lee in an interview with DCD earlier this year. “We had always focused on overall cooling performance but not the performance of the cooling equipment. Many don’t realize that they [might not be] fully unlocking the specifications that they paid for.”

The test in Digital's SIN11 facility began in September 2020, and was supported by global investment company Temasek Foundation, with a goal of helping data centers in tropical climates where air-cooling is very energy-intensive.

The test tried different configurations, including a liquid-cooled compute pod (LCCP), chilled water (CHW) systems, and dry cooler configurations. The eventual version deployed is designed to be scalable and easy to embed within existing air-cooled data centers alongside conventional servers.

“We are excited about the potential of this partnership to deliver innovative made-in-Singapore solutions that positively impact our sustainability goals. It goes without saying that the onset of the Covid-19 global pandemic highlighted the invaluable role data centers play in the digital economy. We believe liquid cooling has the potential to make an important contribution in reducing total power consumption and CO2 emissions,” says Mark Smith, managing director for APAC at Digital Realty.

“Liquid cooling is an overlooked technology that can give enterprises and data center operators in the tropics a sustainability boost while substantially reducing energy consumption by 20 to 30 percent and water usage by up to 50 percent, added Dr. Lee.