Company is increasing rental prices in line with inflation

The CEO of the second-largest data center real estate investment trust (REIT) in the world has defended his company against claims that the sector is set to decline into irrelevance.

Digital Realty's Bill Stein hit back against suggestions by short-seller Jim Chanos that value was not accruing to "bricks-and-mortar legacy data centers," and was instead going to cloud providers.

DCD Explainer: What is a data center REIT? 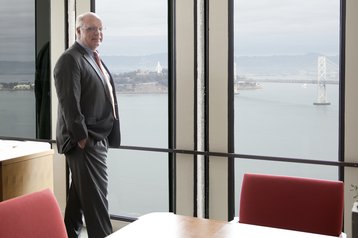 He added that "the story is that although the cloud is growing, the cloud is their enemy, not their business."

Chanos argues that although hyperscalers use data center REITs to supplement their own build-out, as they grow more powerful, the margins they will offer will shrink. He added that REITs are overvalued and are in for a period of declining revenue and earnings growth.

"I think Jim maybe isn't aware that demand has never been stronger in our space," Bill Stein said. "We've had record bookings in the last two quarters. Our fourth quarter bookings were $156 million annualized, our first quarter bookings were $167m annualized - that's up 30 percent from the prior quarter, and in terms of older legacy space we're leasing that space to some of our most sophisticated customers at extremely high rates."

He added: "[Chanos] refers to cloud service providers as our competitors, but we view them as our partners, and they view us as partners. We enable their growth around the world."

Asked specifically about margins and rental rates, Stein said: "We are increasing our rental rates right now, we've been pushing our rates since the first of this year. We're pushing rates on new leases as well as renewals. Our outlook is very strong. We'll continue to push rates, and our escalators are now being indexed to CPI [consumer price index], so we're hedged against inflation.

"When you think about data center REITs against other REITs, our cash flows are basically a product of long-term leases with high-grade credits that are indexed to inflation, and residualities [sic] will be further protected by the current inflationary environment."

Stein also pointed to the company's growth around the world, in new markets in Europe and in Africa, as well as in existing markets like Northern Virginia.

In Virginia, it is developing a huge Western Lands campus that could add 1.5GW of new capacity. "And we have demand there from several of the largest [cloud service providers] in the world, who in the past, one in particular, has tended to build their own, but now they're talking about leasing several data centers from us there," Stein said.

Stein did not disclose which hyperscaler is looking to lease wholesale space at the campus, which will be right next to a planned 1.75 million square foot (162,600 sq m) Amazon Web Services campus.