Built out of an old coal fired power plant

The facility employs 17 people and uses water from Lake Michigan to cool at least half of the facility, which will be managed by T5 Data Centers. 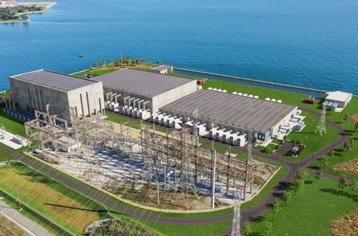 "We're really working for national clients," he said, "It's possible for big companies to come here, large hyperscalers and large enterprise users. We're doing well. Big companies are starting to realize we're out here and that our tax advantages here are fantastic."

After almost a year of construction, Digital Crossroad is now starting to move in servers for its tenants.

"Customers will be able to move their servers in," he said. "We do the installation for them and they move in the electronics. They'll have their own employees on-site full-time, which should bring it to roughly 40 employees by the end of the year. They'll do security, integration, cyber management, heating, and lighting, which is huge, and that type of thing."

Digital Crossroad hopes to completely lease out the first building by 2021 and may soon start up the next phase of construction.

"The demand we've had is so good and the business environment we've had in Indiana is so good, we'd look to move forward," Dakich said. "The next building would be much bigger than this project and we'll keep going."

The original coal plant was originally built in 1928 and had a maximum power capacity of 515MW. The power plant in Northwest Indiana was first eyed up to be a 1 million sq ft campus back in 2018, hav ing originally been offered to Amazon as a headquarters location.

The proposal was put to officials to spur the growth of the Digital Crossroad. Dakich said at the time: "In order to make this [project] grow, in order to make this become a real national player in the data center world, we need your help. If we don't have the tax exemptions, we're not going to be able to compete at that level."