Indiana’s Senate Tax and Fiscal Policy Committee have approved a proposal to cut taxes imposed on data centers in order to lure big business to the state, tweaking a proposal that previously passed the House.

House Bill 1405, which was approved 14 – 0 on Tuesday, would exempt data center equipment and most electricity used at a facility from business personal property tax as well as the state’s seven percent sales tax.

Next week, the legislation will be put in front of the full Senate, where it is eligible for further changes. 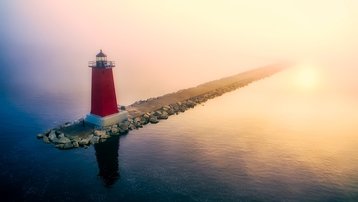 Manistique, part of Lake Michigan where the Indiana data center will draw water for cooling – Pixabay

GovTech reports that a developer will only be able to escape these taxes if they invest up to $150 million into a project within five years. Developers are also required to purchase at least 75 percent of labor and construction materials used in a project through local vendors - a new addition to the bill added by the committee.

If a project meets these requirements it will be exempt from the taxes mentioned for 25 years. But, one state representative has claimed this period isn’t long enough to reel in data center giants like Google and Amazon.

State representative Ed Soliday said during the state meeting: “We feel it should be 50 [years]. That's what makes us competitive."

The proposal is designed to spur the growth of the Digital Crossroads of America Data Center, which is currently planned as a $40 million, 105,000 square foot project, but could expand into a $200 million campus with 400,000 square feet of lake-cooled data storage.

Tom Dakich, who is developing the Digital Crossroads of America Data Center said to the committee: "In order to make this [project] grow, in order to make this become a real national player in the data center world, we need your help. If we don't have the tax exemptions, we're not going to be able to compete at that level."

The development has already been awarded a $9m conditional tax break that has been approved by the state of Indiana. The company also previously discussed expanding the facility, prior to this bill's creation.

The Indiana data center project is cooled by water from Lake Michigan. Using a lake as a natural cooling source has also been implemented by French company Savoie Technolac, which uses freshwater from the Lac du Bourget for its cooling needs.

Green Mountain’s two data centers in Norway use natural water sources to cool their IT loads. The company’s DC1 facility uses gravity to draw water from a fjord, from the depth of 246ft, up through the pipes and into the pumps of a cooling station.