Sri Lankan telco Dialog Axiata has launched a new data center in Piliyandala, outside the city of Colombo.

The new facility was inaugurated last week, and from it Dialog will offer cloud and colocation services to enterprise and government customers. 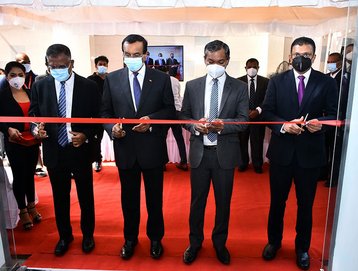 “With the launch of our most recent data center in Piliyandala built in accordance with the latest ISO and global Data Centre standards, supplemented by our investments in the Bay of Bengal Gateway and Maldives Sri Lanka Cable system, we aim to establish the most secure and scalable infrastructure to position Sri Lanka as a leader in this digital age,” said Supun Weerasinghe, Group chief executive of Dialog Axiata.

Formerly known as MTN Networks and later Dialog Telekom, Dialog Axiata is one of the largest telco firms in Sri Lanka. The company is a subsidiary of Malaysian telco firm Axiata Group Berhad.

The company opened Sri Lanka’s first Tier-III certified data center in Malabe in 2017. In 2018 the company announced it was forming a joint venture partnership with Orion City to build and manage a 200 rack facility at the Orion City IT Park in Colombo.

“Dialog’s significant investments in the construction, certification and development of new capabilities on data centers are appreciated which is geared to benefit enterprise and Government sector customers across the country while simultaneously contributing to the technological advancement of the South Asia region,” added Oshada Senanayake, Director General of the Telecommunications Regulatory Commission of Sri Lanka.