The facility in Pitipana will offer modern cloud and colocation services

Sri Lanka Telecom (SLT) has opened a 500-rack national data center in Pitipana, 40 kilometers away from the capital Colombo.

The facility was built with the assistance of the Ministry of Telecommunications and Digital Infrastructure, and has obtained Tier III Design certification from the Uptime Institute.

“The capability of providing high speed connectivity is essential to our business, so it makes perfect sense that the data center is meshed into our national backbone network and MPLS network for seamless delivery of hosted applications.” 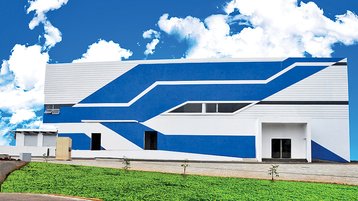 SLT is the licensed national backbone network operator in Sri Lanka, and one of the country’s largest companies. Constriction on its latest data center, a three-story building in the newly proposed Tech City area, began in February 2016.

The opening ceremony on Tuesday was attended by senior SLT officials and politicians including Harin Fernando, the Cabinet Minister of Telecommunications and Digital Infrastructure of Sri Lanka, and Ravi Shankar Prasa, India’s Minister for Law and Justice, Electronics and Information Technology.

“Country’s digital transformation and its related many activities are right on track as you can see today,” Fernando said.

“Government of Sri Lanka is very keen on implementing the National Cloud and Data Centre infrastructure to accelerate the digital transformation. We have already established Local Government Network or LGN which integrates all the government establishments in the country for effective communications, yet another clear example of the way forward.”

“SLT has already set up the nation-wide fiber optic network and connected most important government establishments in to a single unified network under the LGN project and now we are confident that we will be able to provide high quality hosted data products and cloud services,” added Kiththi Perera, chief commercial officer at SLT.