DCD>New York: Ashburn and New York are both winning

Even though Ashburn won 40 times as much as New York

Compared to the success of Ashburn, Northern Virginia, New York and the tri-state area are growing more slowly, but the areas are complementary, according to the opening panel at DCD<New York.

According to CBRE, Loudoun County in Northern Virginia absorbed 175MW of power in the first quarter of this year, while New York only took on 3.6MW. Despite that stark contrast, economic leaders argued that Loudoun's infrastructure could cope, and maintained that growth in Northern Virginia's Data Center Alley area has not been at the expense of other hubs.

The same morning session also heard how Rajiv Rao of the New York State office of IT services consolidated 53 data centers into a private cloud. 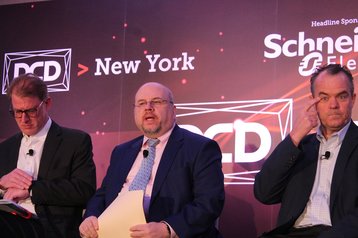 "We caught lightning in a bottle," said Buddy Rizer, executive director of Loudoun County Economic Development, explaining that the rapid growth of Northern Virginia's data center market is about networks and a favorable government regime based on fast approvals and low taxes. But the network effect once applied to New York, pointed out Robert Meyers, SVP of CBRE's data center group.

"There was a critical mass at 60 Hudson [now a location for DataGryd and Equinix] from the days of telegraphy, and this spread outwards," said Meyers. But when people realized that latency was not so critical, and after the 9/11 attack made data centers seem more risky on Manhattan, the focus moved outwards to New Jersey and the wider cloud.

Land is cheaper out of the city, and so is power: electricity is 18c to 23c per kWh in New York city, and 7c to 9c in New Jersey, he pointed out.

Despite this, Rizer said the markets were complementary: "I don't think that if we win, someone else loses," he said. "We act as a complement to New York, Phoenix, and Silicon Valley."

Brian Cox, CEO of Stack Infrastructure (which has facilities in Northern Virginia), agreed - but suggested things might change: "New York has eyeballs, and eyeballs always win over time." This was a reference to the edge, and "edge PoPs" (resources close to customers) are providing business in 60 Hudson, said Tom Brown of DataGryd.

Rizer did not think Data Center Alley was reaching its limits, even though the obvious greenfield land is now all gone and local utility Dominion Power is facing criticism for bringing in a new pipeline for gas to meet demand.

In the audience, Stan Blackwell, customer service director for Dominion Power, responded to DCD's question about the Atlantic Coast Pipeline: "We are retiring coal plants, and this pipeline brings in gas, which has lower emissions than coal."