Still hopes to build a huge campus in Nevada

TerraScale and iQ International plan to merge, continuing under the TerraScale name.

The data center business and the battery company plan to focus on renewably powered data centers. 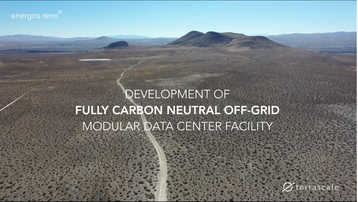 TerraScale plans to develop a huge data center campus next to the Tahoe Reno Industrial Center - home to Switch, Apple, and Google data centers, as well as Tesla's Gigafactory.

Over a decade, it hopes to develop a 3,700-acre site with data centers, a logistics hub, and 500MW of renewable power generated on-site and distributed by a microgrid.

At first, it expects to develop a 20MW modular data center and a 600kW pre-fab data center, in collaboration with undisclosed data center partners.

Last year, TerraScale announced that it would deploy Ambri's Liquid Metal Battery technology at its campus. We have contacted the company to clarify whether this partnership is still going ahead now that it has merged with a battery business.

“Over the past decade, we have seen many new concepts entering the data center market, often related to their power consumption or power storage. While these innovations may initially have been driven by revenue goals, carbon neutrality and ESG principles have become a societal issue and should be on the mind of all responsible companies,” TerraScale CEO Danny Hayes said.

“Our vision is to use data centers as a platform to integrate state-of-the-art renewable energy solutions, high-density compute platforms with low power consumption, and disruptive low energy cooling technologies all wrapped in iron-clad cybersecurity solutions. We call this environment the ‘Green Cloud.’”

Under the terms of the merger, which has been unanimously approved by both companies’ Boards of Directors, the share ownership will be 49 percent TerraScale shareholders, 51 percent iQ shareholders.

The combined business will be listed on the Frankfurt Stock Exchange, where iQ is currently listed.

Once the merger has gone through, the company hopes to raise over $100m.