The midweek has been announcement-heavy for Dublin’s Grange Castle business park: like Google, CyrusOne is planning two data centers on the Irish industrial estate, worth a combined €300m.

The Texas-based data center operator will build both facilities to be two-stories high, accompanied by an office block over three levels. Altogether, the data centers will span almost 35,500 square meters (382,120 sq ft).

Taking on the European market 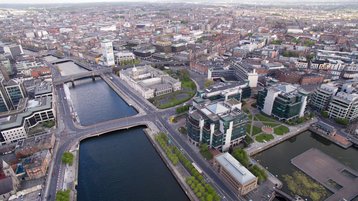 CyrusOne says the construction process is expected to take between 12 to 14 months, and will need a workforce of around 250 people, following which the site will employ up to 220 permanent staff.

The company’s chief executive, Gary Wojtaszek, told The Times that he hoped to “deliver capacity” in 2019, also stating that the company’s European expansion constituted a “top priority.”

CyrusOne entered the European market in 2011, with a data center in London. Additionally, last year, the company bought European colocation provider Zenium for $442m, ramping up its UK capacity and entering the German market thanks to Zenium’s presence in Frankfurt.

Last week, Zenium topped out its second data center in the German financial capital, and announced plans to break ground on a third in the fourth quarter of this year.