CityFibre has filed for permission to install two data center cabins in Newark on Trent, Nottinghamshire.

The UK fiber firm has filed with Newark and Sherwood District Council for the ‘re-location of existing containers’ and the ‘erection of two data center cabins and associated air conditioning units, generators, meter cabinet and fencing’ on land on Cliff Nook Lane, to the rear of 96 Appleton Gate in Newark On Trent. 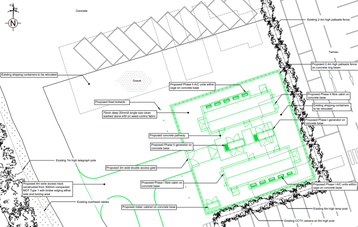 The development would include 10 air conditioning units, two generators, and a 2.4-meter palisade fence. The site is part of a larger parcel of industrial land close to the East Coast Main railway line, with CityFibre describing the land as ‘unkept, underused, and derelict’ and the development of a fiber broadband exchange on the site would enhance the economic performance of the area through better connectivity. The cabins would be developed over two phases.

The company is planning small Edge facilities across the UK including a warehouse retrofit and a fiber cabin at the Hornets Rugby Football Club in the city in Weston-super-Mare, Somerset, and another in Bradford.

CityFibre recently completed a £1.125bn ($1.531bn) financing round as it continues to roll out fiber across the country. The round included £825m of equity and added Mubadala Investment Co and Interogo Holding as new investors, while it also added Crédit Agricole CIB and National Australia Bank to its banking syndicate as it secured a £300m extension on its banking facilities.

Greg Mesch, Chief Executive Officer of CityFibre, said: “We’re thrilled to announce the completion of a £1.125 billion capital raise, the largest ever secured to support the UK’s Full Fibre future. We also take great pleasure in welcoming Mubadala and Interogo Holding as new investors in this important project. This new capital will not only underpin our rollout to up to 8m homes across 285 cities, towns and villages, but will also enable our participation in the Government’s ‘Project Gigabit’ program to extend our future-proof infrastructure to rural areas and ensure no one is left behind.”