Asks China for help, even though China wants its tech

The world's largest chip lithography company ASML has warned that a Chinese rival is marketing products that may infringe on its intellectual property rights, after claiming its trade secrets were stolen.

The Dutch company claims that DongFang Jingyuan Electron Ltd. is using software IP it stole for its own products, and is urging customers not to do business with the company. 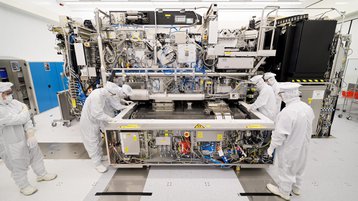 “Early in 2021, we became aware of reports that a company associated with XTAL Inc., against which ASML had obtained a damage award for trade secret misappropriation in 2019 in the USA, was actively marketing products in China that could potentially infringe on ASML’s IP rights,” the Dutch company said in its latest annual report released on Wednesday.

"In 2021, we became aware of reports that a company associated with XTAL Inc., DongFang JingYuan Electron (“DFJY”) was actively marketing products in China that could potentially infringe on ASML's IP rights."

ASML successfully won $845 million in a trade secrets lawsuit against XTAL in 2019, and said that it is now “monitoring the situation closely and is ready to take legal action if appropriate.”

The company said that it has reached out to customers "urging them not to aide or abet this company, DongFang," as well as shared its concerns with Chinese authorities.

ASML said that the IP stolen was software-related, and not ASML’s core lithography technology.

Lithography is a critical part of the semiconductor manufacturing process, with ASML dominating the high-end market.

For older chip manufacturing, which can use deep ultraviolet (DUV) lithography systems, ASML competes with Nikon and Canon. But for advanced extreme ultraviolet (EUV), there is no peer competitor. ASML is believed to have accounted for 91 percent of all lithography sales in 2020, with its machines snapped up by desperate chipmaking companies amid a global semiconductor crunch.

But as a Western firm, its products can be impacted by US and European trade sanctions.

Last year, China pressured the Dutch government to let ASML sell one of its 163,000kg $150m machines to Chinese chip makers. That would allow those fabs to develop the latest chips for sanctioned companies like Huawei and ZTE, which have been cut off from non-Chinese suppliers like TSMC.

Under pressure from the US, the Netherlands has yet to grant an export license.