But we're not sure why it will cost so much

A new supercomputer is set to be built in Hainan to support the Wenchang Spacecraft Launch Site.

The facility is set to cost 20 billion yuan ($3.1 billion), which would make it one of the world's most expensive supercomputers. 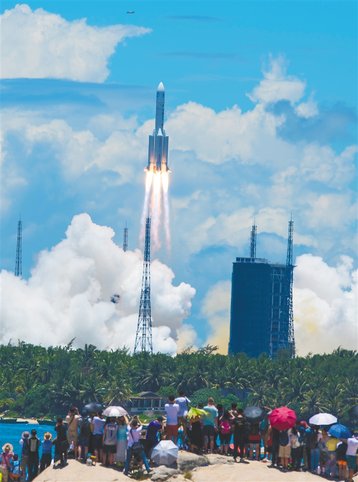 A huge supercomputer for space

It will also provide big data and cloud services to industries like aerospace and marine sectors from 2022, Chinese state-backed Hainan Daily claims.

The Wenchang Spacecraft Launch Site is China's fourth and southernmost spaceport, and first launched a rocked in 2016. That year a Long March 7 and Long March 5 rocket took off without incident.

In 2017, a Long March 5 rocket failed to complete its mission to put a Shijian-18 communications satellite into orbit around an hour after liftoff. In 2020, another Long March 5 put China's first indigenous Mars rover into space.

The new supercomputer will help with such calculations, as well as analyze data from space, and provide services to related industries. The system comes at the US adds further sanctions against Chinese supercomputing companies, including a recent trade embargo on Phytium for helping simulate hypersonic missiles.

Few details about the Wenchang system are public, but its cost appears to be astronomical. The world's fastest supercomputer, Japan's Fugaku system, cost a little over $1 billion over a decade of R&D.

The previous record-holder, Summit, cost $200m. The upcoming Frontier supercomputer, the world's first exascale system, cost $600m - although that figure rises if you count the cost of various R&D projects that helped make it possible.

This week, the UK government confirmed it would spend $1.56bn over a decade on an HPE Cray supercomputer running Microsoft Azure for weather forecasting.

It is not clear why the Wenchang supercomputer will cost $3.1 billion, as the Hainan Daily claims, nor over which time frame that cost covers.