The Met Office has officially selected Microsoft and HPE for its new 60 petaflops supercomputer.

Microsoft will integrate its Microsoft Azure’s supercomputing-as-a-service with an HPE Cray EX system along with a Microsoft high-performance active data archive system that will support nearly 4 exabytes of data.

“We are delighted to be working in collaboration with Microsoft to deliver our next supercomputing capability. Working together we will provide the highest quality weather and climate datasets and ever more accurate forecasts that enable decisions to allow people to stay safe and thrive,” said Met Office chief executive Penny Endersby.

“This will be a unique capability which will keep not just the Met Office, but the UK at the forefront of environmental modeling and high-performance computing.

“This investment by the UK government is a great vote of confidence in the Met Office’s world-leading status as a provider of weather and climate science and services as well as in our national commitment to build a more resilient world in a changing climate, helping build back greener across the UK and beyond.” 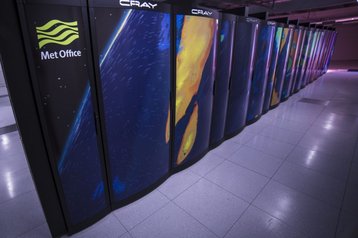 The Met Office will also use Azure high-performance computing (HPC) cloud solutions such as HB-series InfiniBand clusters powered with AMD Epyc processors. The supercomputer will be built in four quadrants, each consisting of an HPE Cray EX supercomputer integrated into Azure.

“The potential of the deep expertise, data gathering capacity and historical archive of the Met Office, combined with the sheer scale and power of supercomputing on Microsoft Azure will mean we can improve forecasting, help tackle climate change and ensure the UK remains at the forefront of climate science for decades to come,” said Microsoft UK CEO Clare Barclay.

The project is already underway and will become operational in July 2022. The infrastructure will be based ‘in the South of the UK’ and will be powered through the use of 100 percent renewable energy. The first generation of the supercomputer solution will have a combined total of over 1.5 million processor cores and over 60 petaflops of aggregate peak computing capacity. Microsoft says it will deliver further upgrades in computing capability over the next ten years.

“This partnership between the Met Office and Microsoft to build the world’s most powerful weather and climate forecasting supercomputer is a ringing endorsement for the UK’s credentials in protecting our environment,” Business Secretary Kwasi Kwarteng said.

“The new supercomputer, backed by a billion-pound UK government investment, will act as a catalyst for unlocking new skills, technologies, and jobs right across our economy – from data scientists to AI experts - all as part of our efforts to build back better and create a cleaner future.”

DCD first reported that Microsoft had been awarded the Met Office contract in February after Atos filed a lawsuit saying it had been unfairly excluded from the tender process. The company claimed it was told it had filed a ‘non-compliant tender’ over its processor choices, despite the Met Office providing no stated requirements on hardware. The UK Government defended its stance, saying Atos’ proposal was not ‘architecturally equivalent’ to previous systems as was required.