Underground operator now has a 6MW facility above ground

Located in Bettendorf, Iowa, the 57,000 square foot 6MW ColoHub facility - a former grocery store which was previously used for Bitcoin mining, according to a report in Vice - will give the company an equidistant foothold between Midwestern state capitals of Chicago (Illinois) and Des Moines (Iowa), and increase its presence in the Quad City area. 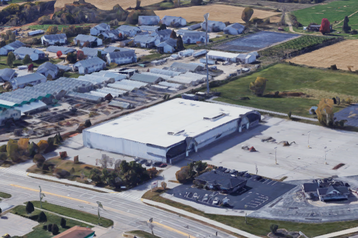 Coming up for air

Prior to the purchase, the company had just one data center, the Bluebird Underground Data Center, which is embedded in an old repurposed mine in Springfield Missouri, which the company is currently in the process of expanding to offer twice its original capacity. Bluebird says the underground site will be established as a Tier III site.

The original facility connects to Bluebird’s 9,800 route mile (15,771km) fiber and broadband network which runs through the cities of Chicago, Kansas City, Tulsa (Oklahoma), Memphis (Tennessee), Rock Port (Missouri) and Rockford (Illinois), with higher densities of infrastructure located in Illinois and Iowa and points of presence in 151 locations across the Midwest.

The new data center, it says, will help it provide low-latency, redundant services to its growing customer base in the Quad City area, to whom it offers everything from Internet and Ethernet to dark fiber and cloud connect services. The company also recently launched the Springfield Internet Exchange (SpringIX), available in its underground data center.

Michael Morey, President and CEO of Bluebird Network said that having recently completed a 2,500 mile (4023km) fiber route integrating existing networks, “expanding our data center offerings, fortified now with a second facility, is part of our mission to empower businesses and offer a total communications solution.”

Mike McClain, president and CEO of Genese added that “for years Bluebird has been steadily expanding their network in a dedicated and sustainable way,” giving it assurance that “Bluebird and the leadership team will leverage the splendid work accomplished by ColoHub and take its capabilities to new heights with excellent support for our customers—both current and future—in concert with Bluebird’s standards of integrity, accountability and adaptability.”