Building permission for an up to 6.75 million sq ft (650,000 sq m) data center campus is set to be decided on by Kansas City (Missouri) Council.

Constructed over three phases, the campus could amount to 13 buildings with each phase costing around $1.5bn to $2bn, for a potential total of $6bn. It would start small, however, and only grow if it receives interest.

Located on the Golden Plains Technology Park, which itself received permission from the City Plan Commission last week, it will be nested at the northwest corner of Interstate 435 and US Highway 169 outside the city. 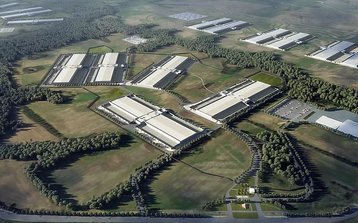 This mammoth construction is being overseen by Diode Ventures, a tech-focused turnkey firm that hopes to capitalize on recent hyperscale developments in the area.

A subsidiary of Black & Veatch, the largest engineering firm in the Kansas City metropolitan area, Diode is proposing to build as many as 13 data centers depending on customer demand - with the company hoping to target large cloud providers.

The Kansas City Council is now deliberating whether to give the project the green light.

If Golden Plains Technology Park is fully built out by 2036, the campus could become one of the world's largest - with each phase planned to have a critical IT load of up to 200MW.

Designing the campus is BNIM, an architecture and design firm local to Kansas City. Also on the team of backers is Olsson Associates an engineering firm which is working with Black & Veatch.

According to Diode, the state offers several geographic and economic advantages for a burgeoning data center market. As a centralized location between the coasts, the Midwest region in the US is located to provide a bridge between dense networks such as in Virginia to Silicon Valley in the West.

The region has a low risk of natural disasters and has competitive power prices and renewable energy resources.

The company said in a statement: “In general, the Midwest is seen as a cost-effective region for doing business compared to the densely-populated markets on the East and West Coasts.

“More specifically, Missouri and Kansas City are seen as attractive places for businesses because of their state and local economic incentives.”