How deep will it go?

The improvements, Bluebird says, will allow it to keep up with competitors in cloud computing, hosting, AI, and blockchain. The expansion is expected to be completed in mid-2020.

“This data center was purposefully built for the convenience of business communities in the region.” 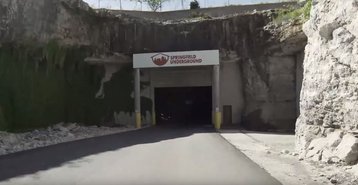 The Bluebird Underground site was acquired by the company in 2015, which quickly got to work on expanding the facility.

The data center is buried 85ft below the surface in an old limestone mine, and was expanded in three phases by Schneider Electric’s data center service provider team, which added Schneider’s Uniflair cooling and RPP (remote power panel) modular power system.

Todd Murren, GM for Bluebird Underground, said the challenges for a subterranean facility included the mine’s irregular surfaces and the lack of GPS location but added that the drawbacks are outweighed by the benefits.

“The thing most above-ground data centers have no control over is the weather - their natural and unnatural environment. Here, that’s not a concern.”

Bluebird has to spread its wings

In September, Bluebird Network was acquired by Macquarie Infrastructure Partners (MIP), providing the network carrier with access to 2,500 fiber route miles in Illinois.

“We are pleased to expand Macquarie Infrastructure Partners’ communications infrastructure portfolio with the acquisition of Bluebird,” said Karl Kuchel, CEO of MIP. “We look forward to working with Bluebird’s experienced management team to grow the company’s network and services in the years ahead.”