Leading the way for others to do the same

A report into strengthening critical supply chains ordered by US President Joe Biden said that the government should recycle equipment across its sprawling data center portfolio.

The lengthy report was the result of a 100-day review of supply chains. Following its publication, the White House said that it will establish a task force to address supply chain challenges in key sectors where “a mismatch between supply and demand has been evident.”

Among the areas it will focus on are "homebuilding and construction, semiconductors, transportation, and agriculture and food.”

Just don't use it to mine Chia

The 250-page report looks at numerous supply issues across the country, including the rare earth metals required for modern computing systems and other technologies.

While efforts should be taken to secure new sources of those materials outside of China - such as the DoD's investment in Lynas Rare Earths, and a review of existing mines - recycling existing equipment could be crucial to ensuring supply meets demand.

"The Federal Government should also lead by example by establishing a government-wide recycling program to reclaim strategic and critical materials," the report states.

"For example, the US Government operates more than 4,000 data centers, which represent a near-term opportunity to leverage Federally-funded R&D to recycle rare earth permanent magnets from hard disk drives."

It should be noted that it is not entirely clear the metric used to claim 4,000 data centers. The report cites a 2018 GAO study of the Data Center Optimization Initiative, but that paper claims 12,062 government data centers.

That number includes essentially any site with a server that provides services. In June 2019, the Office of Management and Budget stepped in to redefine how it counts a data center (an issue the GAO and OMB keep fighting over), excluding 4,500 from that list.

With DCOI, the number of data centers owned by US government agencies has declined, but it is not clear how many are in operation.

A 2021 GAO report - which should have been cited by the supply chain study - estimates that there were 5,916 data centers as of August 2018, per the OMB definition of a data center.

However many data centers the government has, the equipment could provide a valuable source of rare earth materials, and help incentivize other companies to follow suit.

"Recycling of rare earth permanent magnets is an area of increasing activity among domestic entities, including one company sponsored by the DoD under a Defense Production Act (DPA) Title III award and an active area of research funded by the Department of Energy," the report states. 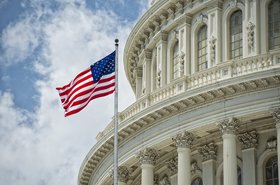 But, it adds, "though increasing recycling rates for strategic and critical materials is advantageous, recycling alone is typically inadequate to supply the volumes of material required for domestic consumption. Even if 100 percent recycling rates were achieved for a particular supply chain, increasing demand necessitates primary production."

A 2018 study by Oak Ridge National Laboratory was able to reuse hard drive permanent magnets in an axial gap motor, which could be used in electric vehicles or industrial machinery.

“We’re not inventing a new magnet,” said ORNL’s Tim McIntyre. “We’re enabling a circular economy—putting these recycled magnets into a new package that takes advantage of their strengths while addressing a key materials challenge for American industry.”

Recycling the 35 percent of US drives that are shredded (as of 2018) could result in the recovery of about 1,000 metric tons of magnet material per year, ORNL found.

Another study by the Critical Materials Institute and Ames Laboratory was able to recover more than 99 percent purity rare-earth elements from shredded HDDs.

The group hopes to commercialize the process and sell the newly-formed metal ingots through a venture with Infinium Metals.