An EU project hopes to rebuild the world in virtual space, but the concrete challenges may prove a little too real

The European Union is embarking on an ambitious project to create a digital twin of the world.

Destination Earth seeks to eventually build this second version of the planet - starting with smaller simulacra of specific areas and planetary components, with an eye to eventually expanding.

But the initiative, which has not been previously reported on, faces significant hurdles as it grapples with challenges at a truly global scale. 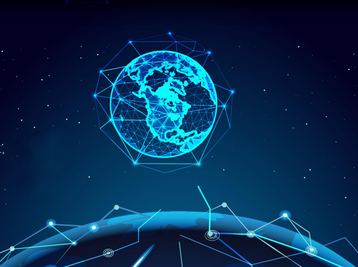 “Digital twins are about developing a digital replica of a physical entity,” Andreas Veispak, Head of Unit in charge of eInfrastructure and Science Cloud in the Directorate-General for Communications Networks, Content and Technology, told DCD.

The first digital twin was proposed in 2001 by Professor Michael Grieves, who fleshed out the idea and officially coined the term a year later. "The concept was to underline product lifecycle management," Grieves explained to DCD.

"So the idea was that we basically could have a product-centric perspective of things that existed in connection with the physical stuff."

The idea was immediately a huge hit in the automotive and aerospace sectors, and has since spread to factories and other industrial settings. “Destination Earth will aim to do this, not in the context of manufacturing or industry, but in the context of Earth systems,” Veispak explained.

As we hurtle ever closer to a climate catastrophe, such concerns will be first and foremost in the project, “with the broad objective of allowing us to continuously monitor the planet's health,” Veispak said.

Destination Earth will build on three European Commission policies: the Green Deal, the Data Strategy, and the Digital Strategy.

Crucial to its development is the EU's Earth observation program Copernicus, managed in partnership with the European Space Agency.

“With Copernicus, we have generated a large amount of data that is really helping to understand the situation of our planet; we can provide products on the management of the land, on the quality of the air, on the quality of the oceans, and so on,” said Mauro Facchini, Head of the Unit in charge of Earth Observation in the Directorate-General for Defence Industry and Space.

This data will help form the core of Destination Earth, although the program plans to use other sources of information, and allow the EU’s members to add their own data.

“Destination Earth will help national and regional or even local actors to nest their own models and activities into the data and information products we produce at the European level,” Hugo Zunker, policy officer in the Directorate-General for Defence Industry and Space, said.

Others are also looking to space for information on the planet below. Cervest, a climate forecasting platform, was formed in 2016 to use cutting edge artificial intelligence models on satellite data to predict climate risk.

"We have a daily feed coming in that goes into our machine learning algorithms," CEO Iggy Bassi explained.

"We're looking at image data, soil data, precipitation data, etc," with the data then combined with several climate models to create predictions of how assets will be impacted by climate change.

The company, which uses data from Planet, Digital Globe, and the Copernicus Program's Sentinel-2, has seen costs of satellite data plummet. "Satellite prices are going to collapse even further in the next three to four years," Bassi said

But relying primarily on external image data to build a model has its flaws. “You couldn't see the ocean currents or the tectonic plates or anything like that,” Grieves said. “You could only observe surface characteristics and then try to make your determination of that. I think that's fine, and in some ways that is a digital twin. But it wouldn't be my definition of a digital twin of the Earth.”

Bassi, who doesn't see his company's product as a digital twin either, said that such a twin could help people visualize climate risk more viscerally. "Even when we're showing our platform to people, investors are scratching their heads like ‘what the hell does climate security mean?’ I think digital twins are a useful tool - if it helps with visualization, we'll certainly look at it."

For the EU’s Destination Earth to even begin to touch on some of the challenges it hopes to simulate, it’ll need more than just satellite data. Working out what data to collect, how to collect it, and making sure it will all be interoperable will be an immense task.

With plans to use artificial intelligence on Destination Earth simulations, structured data will be all the more important, Veispak noted. “Solving this data problem is a real challenge, it is not just about brute computing power.”

But they will also need brute computing power - much more than the EU currently has. Here, Destination Earth ties into EuroHPC, a €1bn ($1.1bn) project to build a series of pre-exascale and exascale supercomputers across Europe in the coming years. However, Destination Earth will have to share computing resources with the myriad other applications the systems are expected to run.

Specific details on Destination Earth’s scope and budget were not disclosed, with much still to be determined before work begins in earnest in 2021. In a rare public comment on the project, the European Commission described Destination Earth in a communique to the European Parliament as a project to “develop a very high precision digital model of the Earth.

“This groundbreaking initiative will offer a digital modeling platform to visualize, monitor, and forecast natural and human activity on the planet in support of sustainable development [that] will be constructed progressively.”

It is that final point that is the most important: “Developing a full digital twin of Planet Earth - encompassing all the ecosystems, all the different variables - at the current stage of not only technological development, but also data availability, and the ability to integrate and fuse the data - is extremely challenging,” Veispak admitted. “These systems are extremely complex.”

Grieves, who is not involved with the project or privy to details beyond those shared by this reporter, was franker. “I'm not sure that we've got the capability to deal with all this, and then when you throw the complex systems aspect in, and the interaction between climate and sea temperatures and sunspots, and all the things that go into it? Boy, looking at that, who's ever thinking they're gonna do this? I'm hoping they're about 10 years old and they plan to live to 100.”

For digital twins to be successful, they are developed with the least amount of data and compute power needed to answer a specific question. If you are crash testing a virtual car, say, you don’t need to model the paint color and license plate number. Everything should be modeled at the minimum fidelity for the specific use case.

“For Destination Earth to become an enabler of an ecosystem and a key element of the Green Deal data space, it should also allow different user communities to bring their own data into the system for the use cases and applications that are specific to them,” Veispak said.

This could prove immensely challenging, as the model will have to be built without specific use cases in mind - forcing a higher fidelity across the board.

The project officials DCD talked to all said that the plan is to produce more limited vertical slices of types of issues or specific areas, but that the aim was to build it into a cohesive whole later on.

Veispak added: “[Destination Earth] could be for climate change-induced effects, the state of the oceans, the cryosphere, biodiversity, land use, natural resources, and so on.”

Grieves found the number of areas both daunting and unrealistic. “The ‘and so on’ is the killer. I'll tell you what, after they got past climate change, it raised my suspicions about what they actually could do,” he said.

“To have this cohesive digital twin of the Earth, I don't see that happening. I think that is so far out, I just can't conceive. I'm not seeing that anytime this millennium.”

It is most likely that the project will stick to vertical areas for a long period of time, expanding in scope and fidelity as time goes on - but never quite reaching that dream of a high-precision global model ready for any use case.

But perhaps it doesn’t have to. There can be a significant amount of value in digital twins of individual areas, particularly climate models, which still have huge error margins. And we can learn things from the project that will have a knock-on effect on the wider world, gaining in use as computing power grows with it.

“Back in the '70s, I ran the largest computer in the world,” Grieves said.

“And we could do weather forecasting, but it took us 48 hours to predict 24 hours in advance. We proved the concept, though.”

Destination Earth may prove concepts too, provide useful information for policymakers and citizens, and create a platform that others can build on.

“All the data which we generate based with EU taxpayers' money, is basically - with very, very few exceptions - free for everybody to use to take it up to build their own products on it,” Hugo Zunker said.

This, one hopes, could unlock a new world of possibilities.