Amazon Web Services will buy a 104-acre plot of land in Hilliard, Ohio, to build a data center campus.

According to the Columbus Business Journal, the data center will be a $200m facility, with council documents revealing that the Hilliard City Council officially agreed to sell its land to AWS.

The city currently owns 97 acres of the proposed land between Cosgray Road and Leppert Road, known in the council documents as the Grener property. 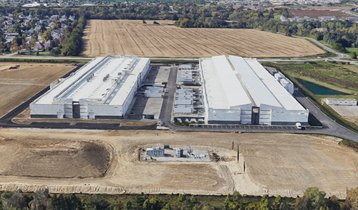 However, as the city promised to sell 104 acres to Amazon Data Services, the city is now purchasing an extra 20 acres from the adjacent Hilliard City School District (HCSD) for $2.8m.

HCSD has been planning on developing its own parcel of land into a sports center and athletics field. After the city buys the 20-acres, about 75 percent of the proceeds from the sale will be used to develop a sports center and field just to the south.

Initially, the council also wanted to build the Grener plot into an outdoor athletic field space and purchased 56 acres from the HCSD for $2.2m in April 2015. The city then sold 6.5 acres to Hilliard Real Estate Holdings and in November 2016 the city purchased 47 additional acres from HCSD for $1,880,000. Eventually, the council found out it wasn't cost-effective to turn the site into a sports complex and instead opted to sell the land to become a data center hub.

The cloud provider has two other data centers in Hilliard, the first one built back in 2015 and a second facility in 2017.

Last year, AWS came out with a plan to build a $400m, 170,000 sq ft (15,700 sq m) data center in New Albany International Business Park, Ohio. Eventually, the tech giant decided on a 112-acre plot finalizing the deal with the local council this year in May for around $28m.