While its Altra and Altra Max CPUs are based on standard Arm Neoverse N1 architecture, Ampere now plans to launch its own custom Ampere Cores, built on a 5nm process. 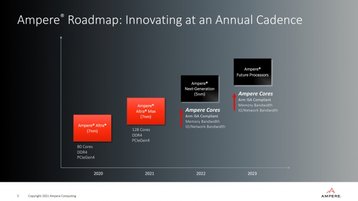 At a media event this week, the company said that Altra customers included Microsoft, Tencent, TikTok's ByteDance, Scaleway, Equinix, CloudFlare, and uCloud. CEO Renee James claimed that the company had other large customers it could not disclose.

Next year, it plans to launch chips with processor cores designed in-house, rather than licensed from Arm. The wider architecture will still be licensed from Arm, but the company will not license Neoverse cores.

This will give the company more control over its chip design, and help it tailor the products to the needs of hyperscalers, James said, claiming that Arm Neoverse was “more general purpose.” Apple similarly developed its own cores for its Arm M1 processors, allowing it to develop hardware for its specific needs.

The new Ampere cores will first feature in its upcoming 5nm 'Siryn' chip. "There are features that are specific to the cloud that wouldn’t make the cut in a general-purpose CPU," James told The Next Platform.

Shifting from Neoverse also means that its designs won't be as easy to replicate by hyperscale companies, many of which are building their own Arm CPUs - some based off of Neoverse.

"I think companies can do both," James said of cloud companies that are buying Ampere and building in-house Arm chips. "Money gives them the options to try things that they might not otherwise try.

"It is our job to convince them that we are going to do the best job for them when it comes to server CPUs."