HAPS – whether they be airships, balloons, or fixed-wing drones – offer a way to provide connectivity to rural and unconnected areas without the upfront costs of cell towers or satellites or the need for specialist receivers. Google/Alphabet's now-defunct high altitude balloon unit Project Loon was probably the most famous example, but a number of companies are looking to develop a successful platform in the space. 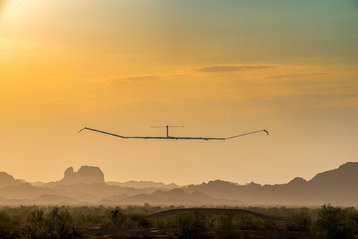 Airbus this week announced that it had launched a connectivity services business through the creation of a dedicated HAPS Services Business based around its fixed-wing Zephyr platform.

The new business will offer telecommunications services via its platform, and sit as a subsidiary of Airbus Defence and Space. Samer Halawi, most recently Executive Vice President and Chief Commercial Officer at Intelsat, has been appointed as Chief Executive Officer of the new business. Taz Esmail has been appointed as Chief Financial Officer; she joins from her most recent role as CFO at Meta Aerospace.

“With thousands of flight hours in the stratosphere and an admirable entrepreneurial spirit, the Zephyr team are well placed to develop future connectivity services. This is an exciting time for the team, building on our success with the leading HAPS, and it is now time for the next step,” said Halawi. “Our connectivity services will provide a viable alternative and complement to terrestrial and satellite-based connectivity solutions, allowing for the first time low-latency and direct-to-device connectivity across vast geographies, and economically. Our sustainable technology allows us to save and improve people’s lives whilst ensuring a better outcome for our planet.”

The company has made other successful test flights more recently, with three planes in service. The company recently completed a successful trial of HAPS-delivered broadband with NTT's DOCOMO.

While Google’s now-defunct balloon-based Loon Project was the most high-profile HAPS project, companies including SoftBank, Deutsche Telekom, and BAE are also working on their own platforms.

In June 2021, SoftBank launched its own Non-terrestrial Network (NTN) service to provide connectivity solutions from above. BAE has previously told DCD it is hoping to have a market-ready HAPS product in two to three years’ time.