Repairs to take place over the weekend

A technical fault with two submarine cables has caused Internet to slow across a number of African nations.

The outages first occurred on Thursday (January 16). The cables involved are the South Atlantic 3/West Africa (SAT-3) and the West Africa Cable System (WACS), both of which run from Africa to Europe. 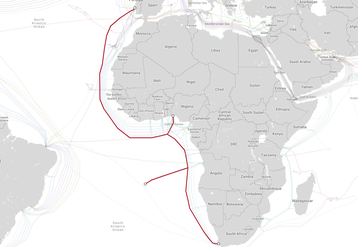 A total of 13 countries were impacted, with local news outlets describing cases of slow Internet speeds and outages. Some of the nations affected include South Africa, Ghana, the Ivory Coast, Nigeria, Gabon, and Cameroon.

Help is on the way

The WACS system is owned by a consortium of telecoms companies ranging from Tata, Vodafone, and various African, Spanish, and Portuguese telcos. SAT-3 is owned by a mix of European, African, and Chinese companies.

Business Insider South Africa reports that a repair ship is being sent to the breaks over the weekend.

South Africa's largest telco MTN Group (MTN) apologized to its customers in Nigeria and the Ivory Coast for the issues. According to a statement by MTN sent to Bloomberg: “This situation is affecting all operators and customers in the region.

“MTN has already begun to restore traffic through other channels and will continue to find alternative routes of connectivity until the situation is resolved.”

Network status update:
Openserve earlier ascertained that the SAT3/WACS break is in the Libreville, Gabon, Vicinity and the WACS cable break has been isolated to the Congo between two repeater sites. Further tests are being conducted by the upstream provider. Updates to follow. pic.twitter.com/8CC7JVRgC1