An application has been filed to allow for up to 277-acres of data center development in Nokesville, in Virginia’s Prince William County.

First reported by Inside NoVa, the House family has submitted an application to change the designation of their property in the county’s Comprehensive Plan from the agricultural estate to the newly-proposed Data Center Edge District (DCED). 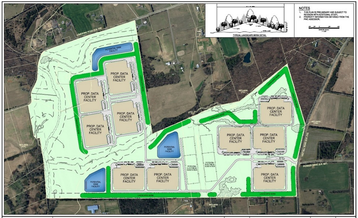 The application – first submitted in May 2021 but only reported this month – seeks to re-designate 277 acres across from the intersection of Vint Hill Road and Pioneer Drive; the site is currently zones as agricultural, but the proposed Comprehensive Plan amendment would allow for the development of data centers (though facilities would still need their own planning permission).

The application was filed by Kettle Wind Family Limited Partnership, Dale Allen House, Lisa House, the estate of Harold Ellis House, Donna House and Royall House Inc. According to the application, the family has farmed the property, located west of Manassas, since the late 1950s.

The DCED would “create opportunities for the construction of data centers in appropriate locations” in the county’s current Rural Areas. Plots would be constructed on a minimum of 40-acres with “access to existing high voltage electric lines.” It notes adjacent properties would be protected by “substantial” berms and buffers.

The land is outside the County’s designated Data Center Overlay District. The filing notes that if the proposed DCED isn’t adopted, the applicants would seek to be included in a Comprehensive Plan change that would allow for data centers with a special use permit.

The filing says the development would bring in more taxes for the county, and allow it to keep up with other counties in the state.

The property is already listed by Weber Rector Commercial Real Estate Services. A preliminary site plan on the real estate listing shows 10 data center buildings on the property. The addresses are listed as 13605 Vint Hill Rd. & 10705 Lonesome Rd. The land has seemingly been on sale and billed as a potential data center site since 2019.

The listing notes an “existing high voltage transmission lines currently on the property,” along with the fact the site is “Approximately 1,000 ft. from both the NOVEC and VA Electric & Power substations.”

One local resident facility with the proposals wrote a letter to the Prince William Times in December in opposition of the development, saying, “the House Farm is no place for a data center.”

As data center firms look to expand within Northern Virginia but beyond the traditional hub of Loudoun County, Prince William has suddenly seen a massive influx of data center proposals, with developments in the works totaling millions of square feet.

The proposed PW Digital Gateway would permit the development of over 27 million square feet of data center uses on over 2,100 acres of land. Reports of a PW Digital Gateway surfaced last year. Originally reports had the development billed as a proposal for an 800-acre development; the proposal aimed to string together 30 parcels of agricultural land owned by 15 property owners to be developed by a single unnamed data center developer, recently revealed as QTS.

The proposals have drawn sharp rebuke from local residents and officials, who have voiced concerns over inviting large amounts of new development to a mostly rural area and worry about the potential impact the rezoning could have on the nearby Manassas National Battlefield.

The Prince William Times notes that a recent town hall meeting on the subject saw some 300 local residents gather to discuss the project.