Though the data center firm isn’t named, the site could be a Yondr campus.

Prince William Board of County Supervisors voted last week to rezone a 196-acre site off Linton Hall Road and behind Piney Branch Elementary School for a new data center campus.

The plot is located on the north side on Linton Hall Road, 196 acres. A proposal was put forward to put forward a comprehensive Plan Amendment, Zoning changes, and building height modification to 70ft for data centers. 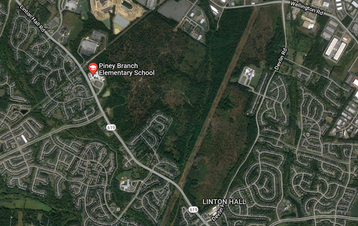 During a presentation, Marian Harders of Walsh Colucci Lubeley & Walsh said around half of the plot was currently within the County’s Data Center Overlay District, and said the lot could accommodate up to 1 million sq ft of data center. The end user data center wasn’t named.

Prince William Times reports the property was once slated for the failed "Stone Haven" residential development. The plan would have seen 1,000 homes built, but was abandoned around 2015.

The local planning commission previously recommended approving the project in June and in July. The requests were all approved at the meeting.

As previously reported by DCD, JK Land Holdings is the application on behalf of an unnamed client, but the announcement came hot on the news that JK Land Holdings had bought 270 acres in Prince William and Loudoun for Yondr, with plans to build up to 500MW of capacity - leading local news site Inside Nova to conclude that the plans are on behalf of Yondr.

Yondr is little-known outside Europe but recently announced a $2 billion data center expansion plan for North and South America. While JK Holdings reportedly has not got a final end-user yet, the planning meeting happened the same day on which Yondr announced JK Holdings was buying land for it in Prince William and Loudoun. The Washington Business Journal reported Yondr's site in Prince William County is near Gainesville.

Elsewhere in Gainesville, an application is currently being considered for a 2.89 million square feet data center development. The I-66 and US 29 Technology Park would sit between Routes 55 and 29, and I-66, and would see up to six data center buildings and substation built on the site in Northern Virginia. The Prince William County Planning Commission deferred the request until October to gather more information and gain preliminary results of the overlay expansion study.

The county has seen two other separate applications for 1 million sq ft+ campuses in recent months; one from Amazon in Manassas and another from an as-yet-unidentified company in Haymarket. An 800-acre development is also in the process of being proposed in the county.