Hanko Data Parks has announced a new hyperscale site in Inkoo, Finland with the capacity for up to 1GW of power on site. 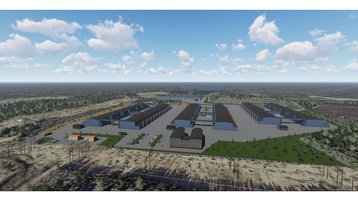 A rendering of the Inkoo site – Hanko Data Parks

1GW capacity... but not for a while

Hanko Data Parks is a collaboration between the Finnish cities of Hanko and Raasepori as well as Tammisaaren Energia, a local utility company in the Hanko-Raasepori region, and Finnish fiber company Karjaan Puhelin.

Site owners Fortum's role in the project is to oversee the zoning process for the site. The energy company is also developing two more hyperscale sites near the Finnish capital of Helsinki, both are slated for a 2020 opening. Waste heat from both sites will be sold to local energy producers.

Earlier this year the Finnish government approved legislation that would ban burning coal for energy uses from May 1st 2019, making waste heat a more attractive prospect for fossil fuel-based energy companies in the region.

Agneta Evers, a partner in Hanko Data Parks, has confirmed that there are currently no tenants for the five facilities, but discussions are ongoing, she said: “The Inkoo site will be available for a hyperscale data center and there is options for some smaller data center too.”

The collection of data parks are all based in Finland’s southern tip; Hanko have said there is a distance of anywhere from 8km to 25km between each of the parks.

Called Inkoo DC, this new greenfield site is by far the largest of the five covering 16 million square feet of space. Inkoo also has the largest potential power capacity of any of the sites, the other four sites only have a planned capacity of 200MW. The site was originally built for and used by a 1,000 MW thermal power plant that is currently under decommissioning.

This 200MW capacity will not be available immediately: Four of the sites currently have 25MW of capacity with the view to bring that up to 200MW in three years’ time. The Inkoo site will have up to 250MW of power in two years’ time, so a 1GW site may be a long while off.

Power for the sites is taken from the national grid through an on-site substation.

Three of the sites currently offer waste heat recovery of 10-20MW to the local district heating system. The company said it plans to offer this service to the other two sites but has not given any details of when this will happen. The Finnish climate also enables part of the on-site cooling to be done through free cooling, and there is also an existing sea water cooling system at the Inkoo site.