LUMI: The supercomputer named after snow

High-performance computing is one of the most exciting areas in IT at the moment. After all, its applications feel almost unlimited.

Whether it's the ATOS and UK Government-planned meteorological supercomputer, the ten exascale HPCs supposedly planned in China, or the new world-record-breaking Frontier, supercomputers are gaining momentum.

These supercomputers, which can enable complex data-intensive and compute-heavy scientific research in areas like quantum mechanics, weather forecasting, aerodynamics, and molecular modeling, seem to be popping up all around the globe.

Europe’s most powerful – the LUMI supercomputer – has now launched, and is the most energy-efficient of the lot.

In a DCD>Deep Dive, we were lucky enough to sit down and talk with Veli-Antti Leinonen, data center specialist for CSC (IT Center for Science), to discuss the LUMI HPC, and how they achieved such impressive efficiency results.

But first, a bit of background.

Based in Kajaani, Finland, LUMI is a EuroHPC joint undertaking, funded equally by the EuroHPC, and LUMI consortium countries. Pre-exascale, the supercomputer is currently capable of 152 sustained petaflops, but this is expected to grow to more than 375 in the coming weeks with a peak performance potentially over 550 petaflops.

“Our main goal and agenda is to support the research activities in Finland in a nonprofit way,” Leinonen told DCD. “We only provide the services to our owners, and we are not competing in the commercial sector of data center services.”

Powered by the same architecture and the Frontier exascale supercomputer, it is no surprise that LUMI is leading in Europe. But what has made this HPC so energy efficient?

“We needed to decide whether to utilize the greenfield or the brownfield concept,” admitted Leinonen. “We had both options, and as you can guess from the pictures, brownfield was our choice in the LUMI project, hence the faster time to market and to pay the capital expenses.”

Brownfield, compared with greenfield, enables the use of pre-existing buildings and facilities. This significantly reduces the construction cost and time, though it does not necessarily guarantee energy efficiency in the long term.

“Compared with a greenfield concept we were able to save 80 percent of the CO2 emissions and roughly 2,000 tonnes of CO2 in the building phase alone. The sustainability was naturally embedded in LUMI, and it resulted in low operational costs, and carbon-negative production that we were able to get as a side bonus in less than a year. It was kind of a no-brainer.”

“But here in the Nordics with the harsh winter climate, I think greenfield was not a realistic option, because we couldn’t start the project until the summer. Whereas brownfield gave us a perfect filter for the cold days and snowy nights. We utilized and placed the LUMI data center in a former UPM paper mill in the Kajaani area.” 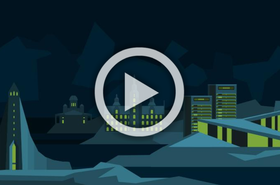 This location was not a random choice. The fact is that the Kajaani paper mill, subsequently shut down and made into a business park named Rensforsin Ranta, was already connected up to plentiful renewable energy sources, as well as having a conveniently placed national grid substation.

“A National Grid substation is already placed within the business park and can feed the area 1,000s of megawatts. So it gives us, scalability-wise, a strong future backbone to lean on.

“The power supply to the area is with the Finland National Grid Lines two times, and then four of the other feeding lines are from the hydro reservoirs and other wind parks in the area,” explained Leinonen.

“The UPS is roughly 10 percent of the maximum power load of the data center, in order to give sufficient time for the storage and the management nodes to be properly shut down in case of an emergency situation. Within the 40 years of history, we only had one power outage.”

On top of the renewable energy sources, excess heat from the facility is sent out to the Kajaani municipality.

“Our PUE factors are 1.04 when we do not utilize the excess heat. When the excess heat is used, the margin for that PUE increases by roughly 20 percent. But it makes business sense to use it because we're actually selling the heat to the district heating network and getting reimbursement for every megawatt-hour of heat that's been pushed into the system.

“We are, of course, looking at that sustainability angle, but while providing a 20 percent reduction of the annual net, we also see that we are reducing our total cost of energy up to 40 percent, and we are able to say that our data center operations are in fact carbon-negative.”

“Excess heat utilization is our primary source of cooling. We basically run our liquid cooling HPC loads as high, temperature-wise, as you can drive them, and then prime that water with the heat pumps to roughly 90 degrees celsius, to then be distributed in the district heating network.

“The demarcation point we've set is after the heat pumps, because cooling is one of the most critical components in the data center, and therefore we want to have that under our control. But as a backup, dryer cooling and chillers in the roofs give us the redundancy for the cooling.”

The LUMI supercomputer is an important reminder that IT architecture can be powerful without hurting the planet. Hopefully, we will continue to see more data centers and HPCs following suit.

To find out more about the LUMI supercomputer, get access to the broadcast episode here: