Malaysia - the rise of a new digital hub?

Malaysia has a population of 32 million, a sizeable GNP, and a total land size that is some 35 percent bigger than the United Kingdom. It is also undergoing rapid digitization, with various data center providers and cloud players such as Alibaba Cloud and Microsoft Azure established in the country. 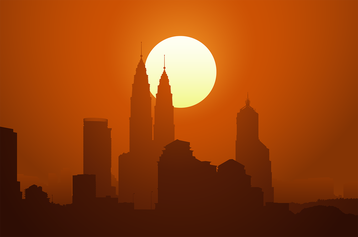 According to the Malaysia Data Center Market Report, the market there is likely to exceed $800 million by 2025. But while there has long been talk of establishing Malaysia as a data center hub and potentially dethroning neighboring Singapore, can the country become an important spot for hyperscale companies?

“Malaysia is considered one of the prime data center markets in Southeast Asia due to the abundant availability of resources and favorable government policies concerning data center infrastructure,” explained Henrick Choo, CEO of NTT Ltd. in Malaysia.

He ticked off the advantages Malaysia holds, which include the competitive cost of power, ready access to skilled employees, cheaper access to land, and lower construction cost compared to other Southeast Asia countries.

There is no question that Malaysia is an important location for NTT – it has a data center campus that has grown to five data centers in Cyberjaya, with the most recent, CBJ5, launched earlier this year.

“The establishment of the Multimedia Super Corridor (MSC Malaysia) and Cyberjaya in particular, has enabled an open ecosystem that allows the business community to grow progressively. Cyberjaya was developed on the idea for a high-tech city akin to the Silicon Valley,” said Choo. 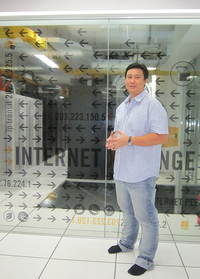 Chiew Kok Hin, CEO of AIMS, pointed to the growing number of hyperscale data centers and their impact on the power grid. Hyperscalers, he says, are a major reason why data centers must make haste to tap into renewable resources to blunt the impact of surging power demands on the environment.

Malaysia is seen as a mature location for renewable energy, with renewables contributing 18 percent to the country’s energy mix. The country recently revised its plans with a more aggressive target of 31 percent renewable energy in installed capacity in 2025, and 40 percent in 2035. But while this sounds like a haven for hyperscale deployments, Chiew cautioned that directly piping renewable energy into data centers isn’t as simple as it sounds.

“Data center power demands typically grow gradually and dynamically according to its IT system requirements or colocation project activation [while] renewable energy systems are more suited for a pre-designed load operation.

"Subject to [regulations and capabilities of utility], data centers may need to source for [the right] renewable energy farms to offset its electricity usage.”

Chiew is referring to how solar energy has an inherently variable daily cycle – it can be impacted by rain or high cloud cover.

To deliver that energy at the time it is needed, requires huge energy storage systems. Hydroelectric power plants are less affected on this front, but locations that are optimal might not be close to existing cities or industrial areas.

Both Chiew and Choo drew attention to Singapore’s data center moratorium, which they attribute to driving an increase in data center construction in Malaysia. (DCD first reported on the moratorium in 2019, though it was only confirmed officially earlier this year).

For instance, as far back as 2018, Singapore-based Bridge Data Centre announced its intention to develop a Singapore data center. Three years on, with no Singapore facility yet, it announced a greenfield facility in Malaysia to complement the two facilities it had earlier acquired in Malaysia.

“Singapore has been the financial and ICT hub in Southeast Asia for the past 30 years, and it served as the primary gateway for the industry. However, with the increasing demand in network diversity, data recovery, labor sourcing, and cost to market – it needs an alternate gateway, and Malaysia checked all the boxes,” Choo said.

“Given the positive momentum and the country’s cost-effective ability to hyperscale, Malaysia makes a good data center location choice for companies planning for further expansions. This being said, Malaysia’s role in Southeast Asia is not to replace any particular geo-location but to act as a complementary piece in a company’s overall cloud architecture plan,” he stressed.

Separately, Chiew highlighted Malaysia’s connectivity to the rest of Southeast Asia, which he says is a strength that can allow Malaysia to complement the major content hub of Singapore by providing regional interconnection to meet growing local needs. 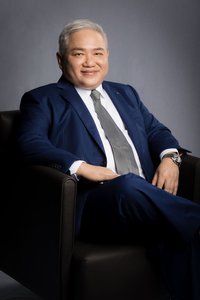 An old complaint from a few years back was slow Internet speed that stemmed from inadequate submarine cables landing in Malaysia. But while the connectivity situation has improved significantly, a new wrinkle threatens to take some wind out of Malaysia’s data center sails: In November 2020, a ”cabotage exemption” was repealed.

Cabotage refers to the right to operate sea, air, or other transport services within a particular territory. States apply cabotage rules in their own waters to protect their local industries - but in 2019, Malaysia applied an exemption which allowed foreign-flagged vessels to repair undersea cables.

This reportedly sped up subsea fiber projects by increasing options and capacity beyond the single local company with the capacity to perform repairs at that time.

Repealing the cabotage exemption would essentially wind back the clock to the previous status quo, and require telecoms firms to apply for a domestic shipping license before commencing work – which can take up to 100 days.

Detractors blame the repeal on politics, saying it's Malaysia’s revenge for its exclusion from various subsea cables. On the other hand, the Malaysian Shipowners’ Association claims that Malaysia’s exclusion from certain subsea projects was because local telecommunication players never participated or invested. For now, the decision is “not finalized,” and it is understood that telecommunication providers Telekom Malaysia and TIME are campaigning for a continued exemption.

A win for the region

Notwithstanding its very real toll on health and the economy, the Covid-19 pandemic dramatically increased digital demand from businesses and consumers alike.

Interest in data centers is off the charts in Malaysia, suggested an industry source to DCD. This was attributed to interest from major cloud players yet to enter Malaysia, Chinese tech giants looking to expand overseas and, of course, the ongoing moratorium in Singapore.

For now, the battle to be the regional digital hub has already begun. To further spur the digital economy, the Malaysian government in February unveiled a comprehensive “MyDigital” blueprint envisioned to make it a regional leader in the new digital era.

The blueprint calls for increasing local data centers to support cloud computing and a government-led cloud-first approach. As part of this strategy, Microsoft, Google, Amazon, and Telekom Malaysia were all granted conditional approval to build and manage hyperscale data centers and cloud services in Malaysia.

But whichever way the data center race shapes up, a stronger data center industry is a win for the region. Chiew summed it up this way: “As Malaysia and Singapore’s data center capabilities grow, so will our human resources and technological capabilities. This leads to an interchange of skills, knowledge, and technology that will further strengthen Southeast Asia as one of the fastest-growing markets for data centers in the world.”