Reducing the carbon footprint of Singapore

How renewables-constrained Singapore is tackling its carbon footprint

Like most cities around the world, Singapore is short on land. But with rising awareness over the need to address climate change, the country finds itself facing a daunting new challenge in slashing its carbon emissions.

Measuring just 721 square kilometers, Singapore is half the size of metropolitan London, and is densely populated to boot (with a population of 5.6 million compared with London's nine million). This appears to be an insurmountable problem for the space-constrained country.

However, the combination of a concerted masterplan by the government to embrace solar energy, an audacious commercial project to pipe in renewable energy from Australia, and the ingenious application of technology to reduce energy use in data centers may just help Singapore chart its way forward as a green data center hub.

According to a biennial report submitted by the Singapore government last year, the country generated more than 50.9 million tons of greenhouse gases in 2014. Under the 2015 Paris Agreement, Singapore agreed to cut emissions intensity from 2005 levels by 36 percent, to be achieved by 2030. Absolute emissions will continue to increase though, under an exemption under country-specific limitations that Singapore claimed, with emissions to peak by 2030.

The uphill battle to reduce its carbon footprint stems from limited renewable energy options. The country currently relies on natural gas for 95 percent of its electricity requirements, piped in via physical gas pipelines or shipped in as liquefied natural gas (LNG). This strategy isn’t set to change any time soon; a Singapore Minister just last month reiterating that natural gas will remain Singapore’s dominant fuel for its energy needs in the foreseeable future.

The lack of hydroelectricity and wind power means that any move toward renewable energy must come in the form of solar power. This explains the plan announced last month to increase solar capacity in Singapore by more than seven times by 2030 through a comprehensive plan to deploy solar panels on rooftops, walls, reservoirs, and even offshore sea space. When fully realized, the plan will bring it to a 2-gigawatt peak (GWp) or around four percent of the country’s total current electricity demand.

This is a good start, but power requirements are growing so fast that this contribution will be much less than four percent of Singapore's total 2030 demands. Certainly, more needs to be done if absolute carbon emission is to come down, and Singapore data centers are a prime target due to the disproportionate amount of energy they consume.

Concerns over the carbon footprint of data centers is understood to have led to a moratorium on new data centers that could last until 2021. Previously-approved data centers with a combined colocation capacity of more than 140MW are still scheduled to come online over the next year, though, so this appears to be a preemptive move against an acceleration in the construction of new data centers rather than an attempt to stop building data centers altogether. 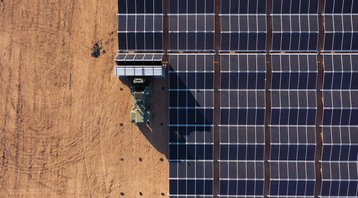 Power from down under

But before looking at specific strategies that pertain to data centers, a new plan is afoot to deliver renewable energy to Singapore. Singapore's Sun Cable has an audacious plan to build a 10-gigawatt (GW) solar farm in Tennant Creek in the Northern Territory, Australia. This will be supported by a 22 GW hour battery storage facility and a transmission network stretching 4,500 km to Singapore.

Assuming it materializes – initial design and securing of funding are expected to close in late-2023 – the three components of the Australia-Singapore Power Link will work together to supply as much as a fifth of Singapore’s power needs. The Northern Territory government has already given the project a “major project” status, which marks it as a significant project and serves to ease the approval process.

Though regulator Energy Market Authority (EMA) declined to comment, it did confirm that it had held meetings with Sun Cable. The EMA also noted that Singapore is open to new energy options that fulfill criteria such as price competitiveness and energy security, as well as help meet Singapore’s climate change commitments.

Singapore has worked hard to diversify its energy sources after a technical fault in the gas pipeline from Indonesia in 2004 plunged half the island into a blackout for a day. This has included building a mammoth LNG terminal on Jurong Island that now has enough capacity to meet the country’s total gas demand. In this context, the appeal of an additional renewable energy “pipeline” from Australia looks extremely compelling.

On the flip side, the power generation sector in Singapore is currently suffering from massive overcapacity. According to a report on The Business Times last year, peak demand in the country averaged just 7,000MW against a total capacity of 13,350MW. With a spare capacity of 48 percent and with power growth a lackluster 1.4 percent in 2017, the situation is unlikely to change soon.

This is a real and present concern as almost all generation companies have slipped into the red in the face of the protracted supply glut. Earlier this month, Nikkei Asian Review ran a report of Singaporean utility Senoko Energy requesting aid from the government, though the company disputed that. Ultimately, any regulatory juggling to enable the Australia-Singapore Power Link to take shape will need to take the large surplus capacity into consideration.

For now, the country is moving forward to strengthen its power grid. Just last month, a project to develop a virtual power plant (VPP) was announced. Envisioned to link and coordinate energy resources such as solar installations and energy storage systems, it will offer greater flexibility and scalability to the grid. If anything, it will certainly serve to develop relevant expertise in managing and integrating solar power sources such as the Australia-Singapore Power Link.

Aside from upping renewable energy use in Singapore, much can be done to reduce wastage and carbon emission by increasing energy efficiency, too. Some novel ideas have been mooted and various research projects kicked off over the years.

One idea being championed by Wong Wai Meng, the CEO of Keppel Data Centres (Keppel), is the harnessing of the cold energy released during the re-gasification process for LNG and using it to cool data centers. To make this a reality, a team from NUS Engineering, Keppel and Singapore LNG Corporation last month announced plans to develop a prototype of a new cooling medium. This will be used to store and carry cold energy from the Singapore LNG Terminal to various data centers in Singapore.

Elsewhere, Keppel is also in talks to float a data center off the coast of the land-scarce island of Singapore. Though the idea is to alleviate land use, being at sea also means that seawater cooling could be an option.

Finally, while there is no magic bullet to reduce PUE in the face of Singapore’s constant hot and humid environment, research was initiated in 2016 to serve as a proof-of-concept and to develop new approaches to infrastructure in tropical climates. When DCD spoke to Wong earlier this year in September, he told us that trials have concluded and that the findings will be announced soon. This is certainly an area worth keeping an eye on.