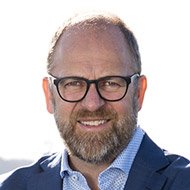 Mr. Nærbø is the founder of Bulk Infrastructure, a leading provider of sustainable digital infrastructure in the Nordics. His company is an industrial investor, developer and operator of industrial real estate, data centers and dark fiber networks. Bulk has built several datacenters, the hyperscale data park, N01 Campus, which is the world’s largest data center campus fueled with renewable energy (hydroelectricity), Oslo Internet exchange and are currently building a new datacenter in Esbjerg, Denmark.

Mr Naerboe started his career in shipping working as a shipbroker and charterer in the period 1991-1998. He later worked from 1998-2005 as an investment portfolio adviser with focus on real estate, hedge funds and fixed income investments. By starting Bulk Infrastructure in 2006 he quickly became one of the major real estate developers in Norway and now holds the leading role in the logistic and industrial sector. He later identified the close relationship between logistics and data center infrastructure, which lead to the initiative of establishing datacenters and the expansion of the Nordics dark fiber networks. Through this initiative, Bulk is already playing a major role in developing a Nordic datacenter industry.