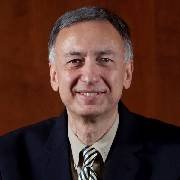 Dr. Bahgat Sammakia, a SUNY distinguished professor of mechanical engineering, is the Vice President for Research at Binghamton University. He is the current and founding director of S3IP, a New York State Center of Excellence. He is the director of the Center for Energy-Smart Electronic Systems (ES2), an NSF IUCRC founded in 2011 with a focus on reducing the energy consumed by data centers around the world. He is also the Binghamton University director of the Center for Heterogeneous Integration Research in Packaging (CHIRP), established in 2018 by the Semiconductor Research Corporation (SRC) and led by Binghamton University and Purdue University. Sammakia served as the interim president of SUNY Polytechnic Institute from December, 2016 to June, 2018. He is a fellow of the American Society of Mechanical Engineers, the National Academy of inventors, and the IEEE. Sammakia has contributed to several books on heat transfer, holds 21 U.S. patents and has published more than 250 peer-reviewed technical papers. Sammakia, who received the SUNY Chancellor’s Award for Excellence in Scholarship and Creative Activities in 2010, was honored with the 2010 ITherm Achievement Award for his contributions to the field of semiconductor thermal management. Sammakia earned his bachelor’s degree from the University of Alexandria in Egypt and his master’s and doctoral degrees from the University at Buffalo. A former IBM senior technical staff member focused on research and development of organic electronic systems, Sammakia joined Binghamton’s faculty in the Watson School of Engineering and Applied Science in 1998.