Just when you were getting used to lithium-ion 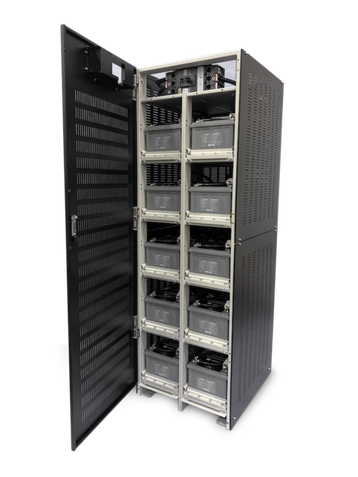 "This is a very high powered battery cabinet and because it's nickel-zinc batteries, they are a small footprint," SVP Steve Jennings told DCD.

"It has a smaller footprint than the traditional lead-acid batteries, even the lithium-ion batteries - if you look at the number of cabinets required to backup a megawatt of inverter power, the lead-acid battery chemistry typically requires six cabinets. Lithium chemistry today requires five cabinets and we require four cabinets."

Each cabinet features 38 battery modules, with eight cells per module.

The cabinets come with ZincFive's battery management systems, which Jennings said "is simply there to manage the charging and discharging of the battery properly and not for monitoring every cell looking at all the voltages and so on." Unlike with lithium systems, there is no risk of thermal runaway, he said.

NiZn is also easy to recycle, Jennings highlighted, as its constituent parts are not toxic.

But, even if you believe in ZincFive's claims about having solved many of NiZi's traditional drawbacks of cycle life and trickle charging, it may be difficult to convince the data center community. "The data center market is conservative for a lot of good reasons, it's a mission-critical market," Jennings said. "But there are still early adopters where you can have a large organization like QTS that has the ability to make an initial deployment. It doesn't put them in a high-risk situation, and they get to try out new technology.

"We're getting pretty excited about doing some larger deployments, hopefully in 2020, particularly with our battery cabinet that we're announcing here."

So far, the QTS deal is the only publicly announced data center deployment of ZincFive's products, but Jennings said there are a few others. The company has had far more success in powering intelligent transport systems, where it has thousands of deployments.

ZincFive is also in talks with the Open Compute Program community about NiZn batteries in the rack, but has yet to become an OCP member.

Beyond its own products, Jennings said that ZincFive is "working closely with the large OEMs in UPS today. I can confidently say all of them are in discussion with ZincFive about the promise of nickel-zinc technology in their battery portfolio."