Two years after the Amsterdam moratorium, where does its data center industry stand? 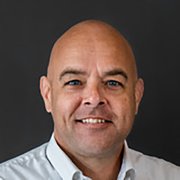 Stijn Grove is the Managing Director of the Dutch Data Center Association, the national trade association for Data Centers in the Netherlands

How are operators adapting to the new regime?

On a summer Friday on July 12th, 2019, the Dutch data center industry was taken by surprise: a sudden moratorium from the Amsterdam and Haarlemmermeer municipality was announced. The construction of new data centers within their borders was halted, pending new to-be-established policies. In close collaboration with the industry, represented by the Dutch Data Center Association (DDA), new policies were designed, presented and implemented in 2020.

With a full year into the new policies, where does the Dutch data center industry stand? What effect did the moratorium have and what’s in store for the future?

The moratorium made one thing clear: the Dutch data center industry was a victim of its own success. The industry was growing with double digits year after year, especially in the Amsterdam area, due to its international attractiveness. The market offers some of the best connectivity options, access to a skilled workforce, proximity to other key European markets and a favorable business environment for foreign direct investments.

The newly designed policies allowed the municipalities to bring sustainable growth to the sector. New projects may only be developed in designated areas, use multiple floors if possible, and meet strict criteria in terms of efficiency and sustainability, such as a PUE of 1.2 for new builds. For more on the policies, see our press release and webinar on the moratorium. 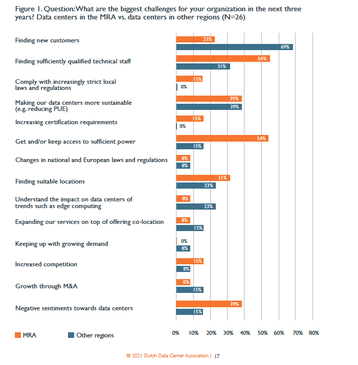 The effects of the moratorium

The new policies brought a clear path for sustainable growth in both municipalities. The industry greatly benefited from this clarity, as shown in the survey held by PB7 Research among DDA participants. The survey is published in the ‘State of the Dutch Data Centers 2021’, our annual market report (which can be freely downloaded here). The research shows that in 2020, the moratorium formed a significant challenge for MRA data centers. One year later, they have adjusted to the new regulatory reality: only 14 percent sees compliance with local laws and regulation as a key challenge, compared to 30 percent in 2020.

Despite the moratorium, the Amsterdam data center market still managed to introduce a high amount of new supply through 2020. Providers added 51MW, with an almost equal amount attributed to the wholesale and retail data center markets. And according to Penny Madsen-Jones, Research Director at CBRE, the Amsterdam market is expected to return to the 2019-post moratorium numbers. In the ‘State of the Dutch Data Centers 2021’ report, she anticipates a record of 71 MW in capacity to come online in 2021. 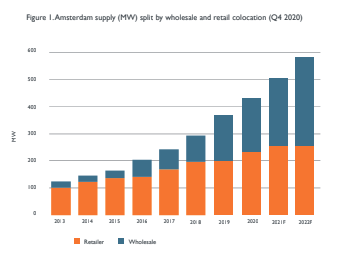 Remarkable growth in other Dutch regions

An important effect of the moratorium was the growing demand in the Dutch markets outside Amsterdam. As more locations in which data center builds can take place are promoted, interest in the Dutch market returned quickly. For the coming years, PB7 identified new data center plans for 211.000 m2, significantly more compared to 2020, with more than a third of this data floor planned outside of the MRA region.

Sustainability is key for sustainable growth

Back in 2019, the moratorium caused serious damage to the sector. Being the first to announce such a moratorium, Amsterdam sent a message to investors: data centers are not welcome here.

However, two years later, Amsterdam has gained a whole new role in the global data center realm, with expertise on how it is considering the industry in terms of sustainability.

With the new policies implemented, the data center hub has gained renewed attraction. We have seen recently that more governments, such as Singapore, Frankfurt, some regions in China and Ireland, have been forced to go down this road. By the time the issues elsewhere are solved, the Netherlands is likely to have more dedicated areas for data center development and policies that provide a clear path for industry growth.

More sustainable data center builds are an undeniable part of our future. One example of this is the European Green Deal in the form of the Climate Neutral Data Centre Pact, which requires data centers to be climate neutral in 2030. With the new sustainable policies, it makes sense that the Netherlands’ still beholds a promising future. We therefore don’t expect any Friday summer days’ surprises in the coming years.